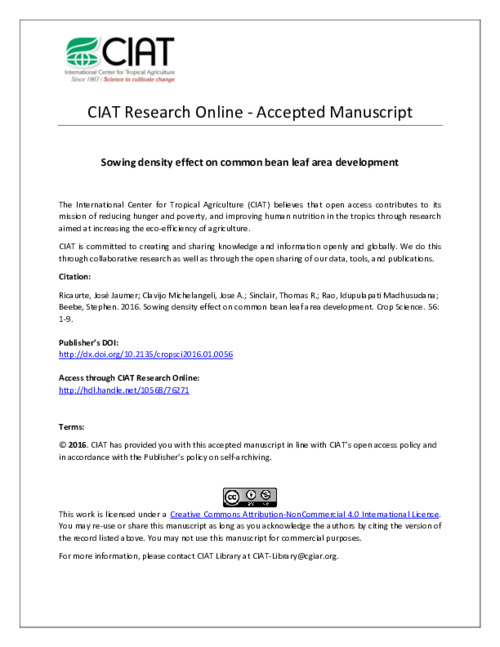 Sowing density is a major management factor that affects growth and development of grain crops by modifying the canopy light environment and interplant competition for water and nutrients. While the effects of sowing density and plant architecture on static vegetative and reproductive growth traits have been explored previously in the common bean, few studies have focused on the impacts of sowing density on the dynamics of node addition and leaf area development. We present the results from two sites of field experiments where the effects of sowing densities (5, 10, 15, 20, 25 and 35 plants m -2 ) and genotypes with contrasting plant architectures (two each from growth habits I through III) on the dynamics of node addition and leaf area were assessed. Analysis of the phyllochron (°C node -1 ) indicated genotype and density effects (but no interaction) on the rate of node addition. While significant, these differences amounted to less than two days of growth at either site. In terms of leaf area development, analysis using a power function reflected large differences in the dynamics and final size of individual plant leaf area between the lower density (<15 plants m used values (>20 plants m -2 -2 ) treatments and commonly ) at the growth habit, but not genotype level. These differences in node addition and leaf development dynamics translated to marked differences between growth habits and sowing densities in estimated leaf area indices, and consequently, in the estimated fraction of intercepted light at lower densities.