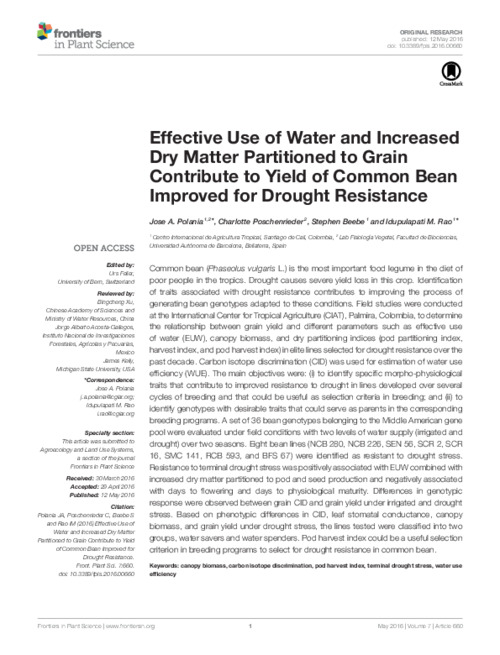 Common bean (Phaseolus vulgaris L.) is the most important food legume in the diet of poor people in the tropics. Drought causes severe yield loss in this crop. Identification of traits associated with drought resistance contributes to improving the process of generating bean genotypes adapted to these conditions. Field studies were conducted at the International Center for Tropical Agriculture (CIAT), Palmira, Colombia, to determine the relationship between grain yield and different parameters such as effective use of water (EUW), canopy biomass, and dry partitioning indices (pod partitioning index, harvest index, and pod harvest index) in elite lines selected for drought resistance over the past decade. Carbon isotope discrimination (CID) was used for estimation of water use efficiency (WUE). The main objectives were: (i) to identify specific morpho-physiological traits that contribute to improved resistance to drought in lines developed over several cycles of breeding and that could be useful as selection criteria in breeding; and (ii) to identify genotypes with desirable traits that could serve as parents in the corresponding breeding programs. A set of 36 bean genotypes belonging to the Middle American gene pool were evaluated under field conditions with two levels of water supply (irrigated and drought) over two seasons. Eight bean lines (NCB 280, NCB 226, SEN 56, SCR 2, SCR 16, SMC 141, RCB 593, and BFS 67) were identified as resistant to drought stress. Resistance to terminal drought stress was positively associated with EUW combined with increased dry matter partitioned to pod and seed production and negatively associated with days to flowering and days to physiological maturity. Differences in genotypic response were observed between grain CID and grain yield under irrigated and drought stress. Based on phenotypic differences in CID, leaf stomatal conductance, canopy biomass, and grain yield under drought stress, the lines tested were classified into two groups, water savers and water spenders. Pod harvest index could be a useful selection criterion in breeding programs to select for drought resistance in common bean.