What role for legumes in sustainable intensification? – case studies in Western Kenya and Northern Ghana for PROIntensAfrica 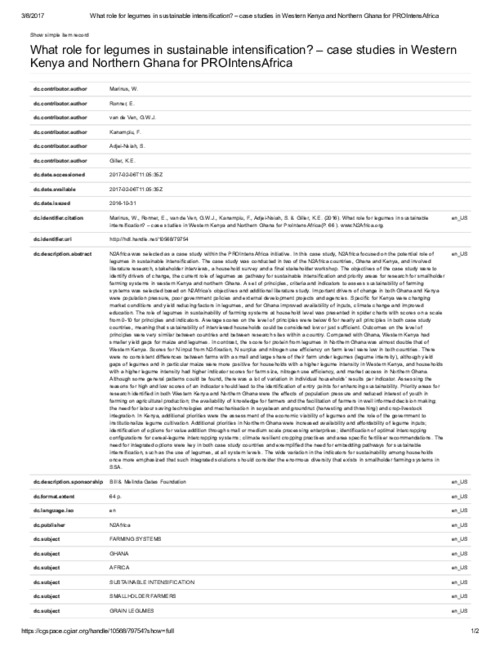 N2Africa was selected as a case study within the PROIntensAfrica initiative. In this case study, N2Africa focused on the potential role of legumes in sustainable intensification. The case study was conducted in two of the N2Africa countries, Ghana and Kenya, and involved literature research, stakeholder interviews, a household survey and a final stakeholder workshop. The objectives of the case study were to identify drivers of change, the current role of legumes as pathway for sustainable intensification and priority areas for research for smallholder farming systems in western Kenya and northern Ghana. A set of principles, criteria and indicators to assess sustainability of farming systems was selected based on N2Africa’s objectives and additional literature study. Important drivers of change in both Ghana and Kenya were population pressure, poor government policies and external development projects and agencies. Specific for Kenya were changing market conditions and yield reducing factors in legumes, and for Ghana improved availability of inputs, climate change and improved education. The role of legumes in sustainability of farming systems at household level was presented in spider charts with scores on a scale from 0-10 for principles and indicators. Average scores on the level of principles were below 6 for nearly all principles in both case study countries, meaning that sustainability of interviewed households could be considered low or just sufficient. Outcomes on the level of principles were very similar between countries and between research sites within a country. Compared with Ghana, Western Kenya had smaller yield gaps for maize and legumes. In contrast, the score for protein from legumes in Northern Ghana was almost double that of Western Kenya. Scores for N input from N2-fixation, N surplus and nitrogen use efficiency on farm level were low in both countries. There were no consistent differences between farms with a small and large share of their farm under legumes (legume intensity), although yield gaps of legumes and in particular maize were more positive for households with a higher legume intensity in Western Kenya, and households with a higher legume intensity had higher indicator scores for farm size, nitrogen use efficiency, and market access in Northern Ghana. Although some general patterns could be found, there was a lot of variation in individual households’ results per indicator. Assessing the reasons for high and low scores of an indicator should lead to the identification of entry points for enhancing sustainability. Priority areas for research identified in both Western Kenya and Northern Ghana were the effects of population pressure and reduced interest of youth in farming on agricultural production; the availability of knowledge for farmers and the facilitation of farmers in well informed decision making; the need for labour saving technologies and mechanisation in soyabean and groundnut (harvesting and threshing) and crop-livestock integration. In Kenya, additional priorities were the assessment of the economic viability of legumes and the role of the government to institutionalize legume cultivation. Additional priorities in Northern Ghana were increased availability and affordability of legume inputs; identification of options for value addition through small or medium scale processing enterprises; identification of optimal intercropping configurations for cereal-legume intercropping systems; climate resilient cropping practises and area specific fertiliser recommendations. The need for integrated options were key in both case study countries and exemplified the need for embedding pathways for sustainable intensification, such as the use of legumes, at all system levels. The wide variation in the indicators for sustainability among households once more emphasized that such integrated solutions should consider the enormous diversity that exists in smallholder farming systems in SSA.