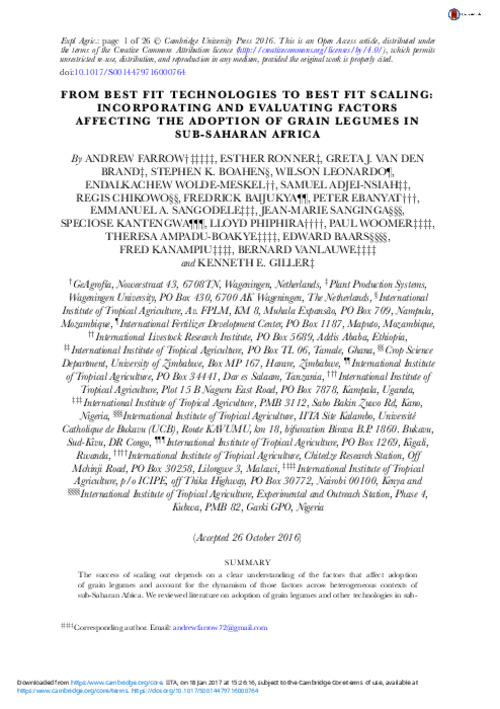 Sub-Saharan Africa is characterised by diverse and heterogeneous environments (World Bank, 2009), languages, cultures, institutions and histories (Hopkins, 2009) and farming systems (Giller et al., 2011b; Tittonell et al., 2010, 2011). These diverse contexts are a constant challenge to agricultural development programmes. Many initiatives that target smallholder farmers and pastoralists who have not beneﬁted from the one-size-ﬁts-all technologies of the green revolution grapple with scaling up and out agricultural innovations (Franzel et al., 2001). Whilst the return on investment of many technologies has been proven in pilot studies or over small areas, it has been difﬁcult to achieve adoption of these technologies by large numbers of farmers over large areas (Lynam and Twomlow, 2014). This is especially pertinent to innovations which offer potential long-term beneﬁts (Andersson and D’Souza, 2014), which are complex, or which rely on the positive alignment of multiple enabling environments (e.g. Johansson et al., 2013). Successful scaling therefore requires that the factors affecting adoption as well as the spaces or contexts that scaling has to navigate, are well understood, are incorporated in the scaling process and are iteratively evaluated (Linn, 2012). The N2Africa: Putting Nitrogen Fixation to Work for Smallholder Farmers in Africa project aims to enable African smallholder farmers to beneﬁt more from symbiotic N -ﬁxation by grain legumes through effective production technologies including inoculants and fertilisers. N2Africa is guided by a principle of ‘development to research’ (Giller et al., 2013), whereby project monitoring and evaluation allows the challenges associated with delivery and dissemination of legume options to guide the research questions. This is implemented by feedback loops between the ‘development’ activities to research, and back again.