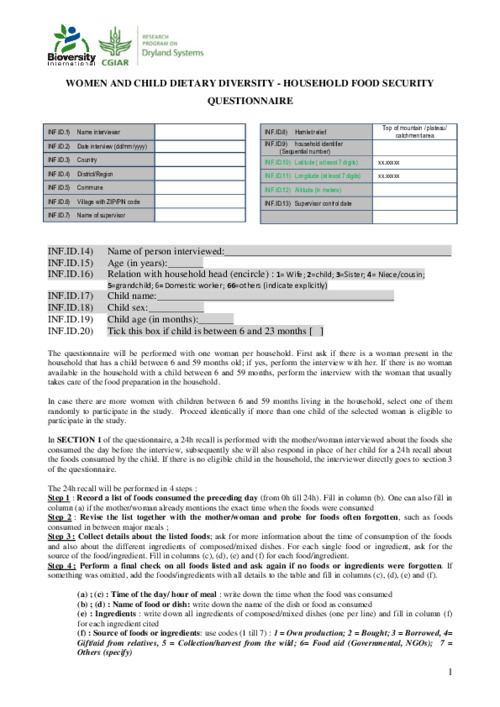 The questionnaire elicited information on foods consumed and their sources for selected mothers and children of the households interviewed for the ABD-Assessment (24-hour recall); information on young and child feeding practices; and on household food secuirty, and risk preferences of mother. In the same households selected for the ABD-Assessment, one woman per household was selected. The first choice of respondent was a woman that had a child between 6 and 59 months old; if no woman was available with a child between 6 and 59 months, the interview was perfomred with the woman that usually takes care of the food preparation in the household. In case there were more women with children between 6 and 59 months living in the household,one of them was selected randomly . The same procedure was done if more than one child of the selected woman is eligible to participate in the study. For the food consumed by mother and child, the period was the previous 24 hours. Interviews took place between the 25 of August and 30 September 2014 (2 cases 30, 31 of October). For the household food security data refer to the previous 30 days of the day of the interview. For the infant and child feeding practices, they are in general. Three villages in the Bijapur District: Mannur, Nandyal, Balaganur were surveyed.