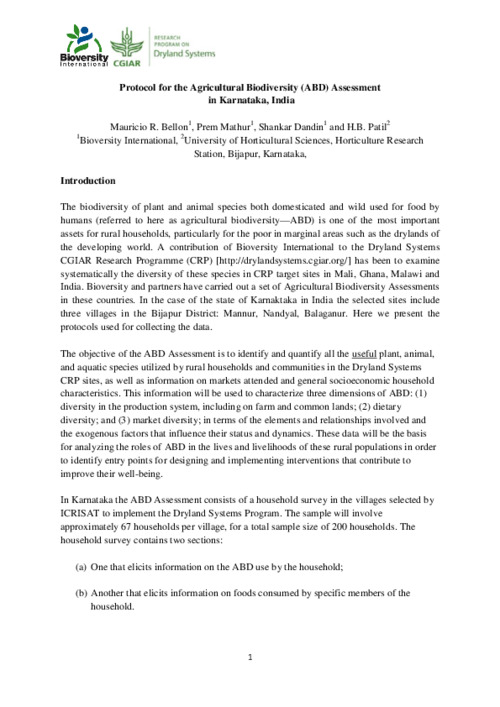 A series of focus group discussions (FGDs) to elicit the local knowledge about the agricultural and wild biodiversity present in the study areas in order to generate: (a) an inventory (list) of all useful plant, and animal species used by local communities for human food, animal feed, medicine, fuel, housing, farming tools, etc. and their local names; (b) an inventory of all foods consumed; (c) an inventory of species and products bought and sold in markets that people in the village attend. Two FGDs per village in three villages. FGDs were held separately for men and women in order to collect gender disaggregated data. In each of the three villages, two focus group discussions were held separately. One with men and the other with women. Each group will deal with the three aspects for discussion: Useful biological diversity in the production system; Market diversity; and Dietary diversity. There were between 10-16 participants in each group. Each group tried to include a cross-section of individuals involved in agricultural production or at least collecting useful plants from common lands and the wild, representing different levels of access to land (land owners, local land renters and migrant land renters), different ethnic groups present in the village and different age groups (special emphasis should be placed to include younger farmers). For each group there were two facilitators, one to guide the exercise and the other to document the process (take notes, photographs, etc.). The data were elicited using the four-square methodology explained in the Protocol document. Three villages in the Bijapur District: Mannur, Nandyal, Balaganur.