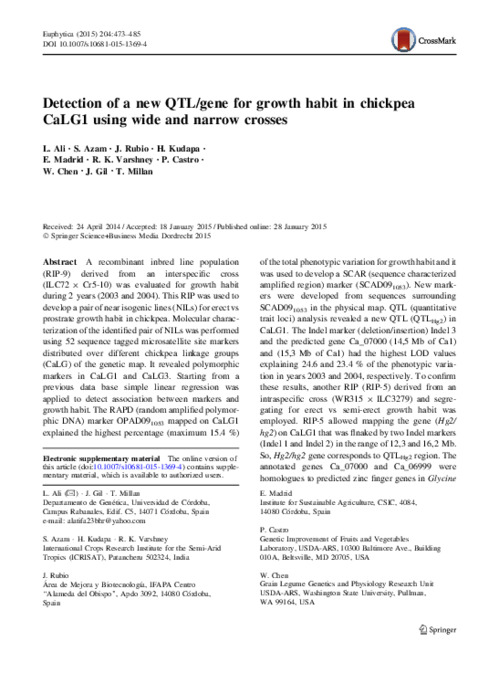 A recombinant inbred line population (RIP-9) derived from an interspecific cross (ILC72 × Cr5-10) was evaluated for growth habit during 2 years (2003 and 2004). This RIP was used to develop a pair of near isogenic lines (NILs) for erect vs prostrate growth habit in chickpea. Molecular characterization of the identified pair of NILs was performed using 52 sequence tagged microsatellite site markers distributed over different chickpea linkage groups (CaLG) of the genetic map. It revealed polymorphic markers in CaLG1 and CaLG3. Starting from a previous data base simple linear regression was applied to detect association between markers and growth habit. The RAPD (random amplified polymorphic DNA) marker OPAD091053 mapped on CaLG1 explained the highest percentage (maximum 15.4 %) of the total phenotypic variation for growth habit and it was used to develop a SCAR (sequence characterized amplified region) marker (SCAD091053). New markers were developed from sequences surrounding SCAD091053 in the physical map. QTL (quantitative trait loci) analysis revealed a new QTL (QTLHg2) in CaLG1. The Indel marker (deletion/insertion) Indel 3 and the predicted gene Ca_07000 (14,5 Mb of Ca1) and (15,3 Mb of Ca1) had the highest LOD values explaining 24.6 and 23.4 % of the phenotypic variation in years 2003 and 2004, respectively. To confirm these results, another RIP (RIP-5) derived from an intraspecific cross (WR315 × ILC3279) and segregating for erect vs semi-erect growth habit was employed. RIP-5 allowed mapping the gene (Hg2/hg2) on CaLG1 that was flnaked by two Indel markers (Indel 1 and Indel 2) in the range of 12,3 and 16,2 Mb. So, Hg2/hg2 gene corresponds to QTLHg2 region. The annotated genes Ca_07000 and Ca_06999 were homologues to predicted zinc finger genes in Glycine max and Pisum sativum, respectively. Hence, they could be considered as possible candidate genes