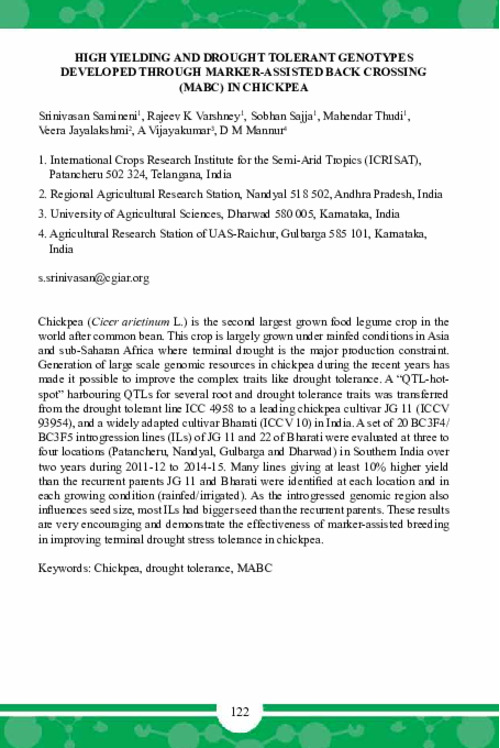 Chickpea (Cicer arietinum L.) is the second largest grown food legume crop in the world after common bean. This crop is largely grown under rainfed conditions in Asia and sub-Saharan Africa where terminal drought is the major production constraint. Generation of large scale genomic resources in chickpea during the recent years has made it possible to improve the complex traits like drought tolerance. A “QTL-hotspot” harbouring QTLs for several root and drought tolerance traits was transferred from the drought tolerant line ICC 4958 to a leading chickpea cultivar JG 11 (ICCV 93954), and a widely adapted cultivar Bharati (ICCV 10) in India. A set of 20 BC3F4/ BC3F5 introgression lines (ILs) of JG 11 and 22 of Bharati were evaluated at three to four locations (Patancheru, Nandyal, Gulbarga and Dharwad) in Southern India over two years during 2011-12 to 2014-15. Many lines giving at least 10% higher yield than the recurrent parents JG 11 and Bharati were identified at each location and in each growing condition (rainfed/irrigated). As the introgressed genomic region also influences seed size, most ILs had bigger seed than the recurrent parents. These results are very encouraging and demonstrate the effectiveness of marker-assisted breeding in improving terminal drought stress tolerance in chickpea.