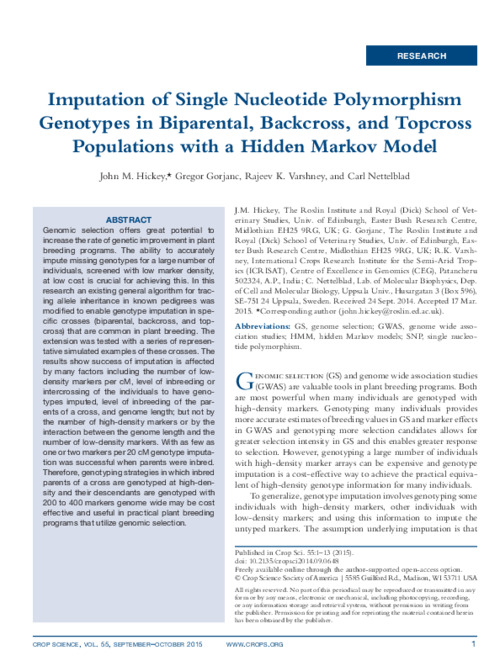 Genomic selection offers great potential to increase the rate of genetic improvement in plant breeding programs. The ability to accurately impute missing genotypes for a large number of individuals, screened with low marker density, at low cost is crucial for achieving this. In this research an existing general algorithm for tracing allele inheritance in known pedigrees was modified to enable genotype imputation in specific crosses (biparental, backcross, and topcross) that are common in plant breeding. The extension was tested with a series of representative simulated examples of these crosses. The results show success of imputation is affected by many factors including the number of low-density markers per cM, level of inbreeding or intercrossing of the individuals to have genotypes imputed, level of inbreeding of the parents of a cross, and genome length; but not by the number of high-density markers or by the interaction between the genome length and the number of low-density markers. With as few as one or two markers per 20 cM genotype imputation was successful when parents were inbred. Therefore, genotyping strategies in which inbred parents of a cross are genotyped at high-density and their descendants are genotyped with 200 to 400 markers genome wide may be cost effective and useful in practical plant breeding programs that utilize genomic selection.