Scope for improvement of yield under drought through the root traits in chickpea (Cicer arietinum L.) 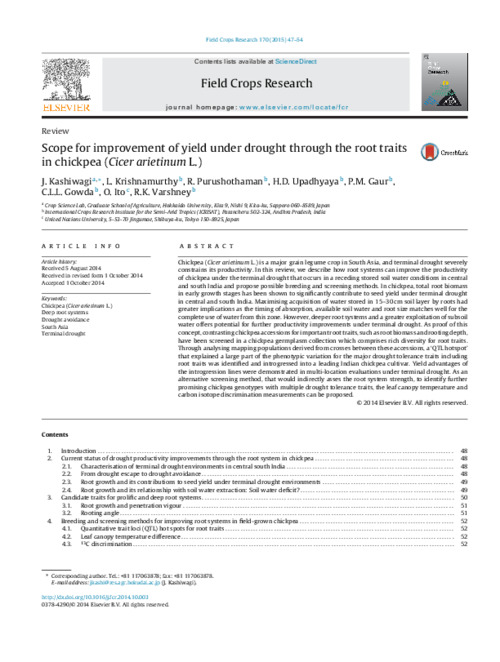 Chickpea (Cicer arietinum L.) is a major grain legume crop in South Asia, and terminal drought severely constrains its productivity. In this review, we describe how root systems can improve the productivity of chickpea under the terminal drought that occurs in a receding stored soil water conditions in central and south India and propose possible breeding and screening methods. In chickpea, total root biomass in early growth stages has been shown to significantly contribute to seed yield under terminal drought in central and south India. Maximising acquisition of water stored in 15–30 cm soil layer by roots had greater implications as the timing of absorption, available soil water and root size matches well for the complete use of water from this zone. However, deeper root systems and a greater exploitation of subsoil water offers potential for further productivity improvements under terminal drought. As proof of this concept, contrasting chickpea accessions for important root traits, such as root biomass and rooting depth, have been screened in a chickpea germplasm collection which comprises rich diversity for root traits. Through analysing mapping populations derived from crosses between these accessions, a ‘QTL hotspot’ that explained a large part of the phenotypic variation for the major drought tolerance traits including root traits was identified and introgressed into a leading Indian chickpea cultivar. Yield advantages of the introgression lines were demonstrated in multi-location evaluations under terminal drought. As an alternative screening method, that would indirectly asses the root system strength, to identify further promising chickpea genotypes with multiple drought tolerance traits, the leaf canopy temperature and carbon isotope discrimination measurements can be proposed.