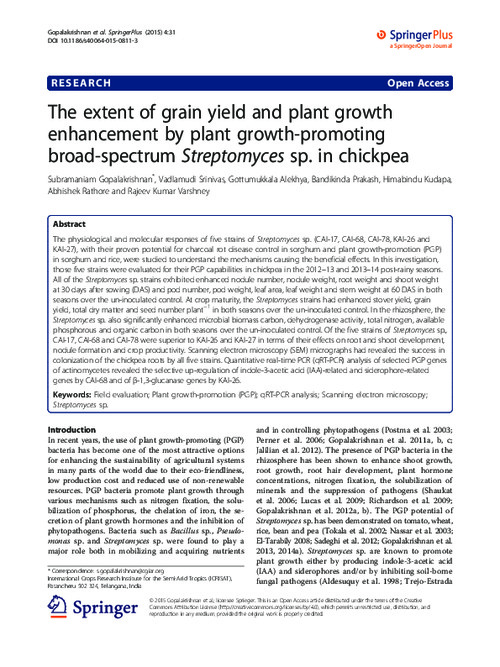 The physiological and molecular responses of five strains of Streptomyces sp. (CAI-17, CAI-68, CAI-78, KAI-26 and KAI-27), with their proven potential for charcoal rot disease control in sorghum and plant growth-promotion (PGP) in sorghum and rice, were studied to understand the mechanisms causing the beneficial effects. In this investigation, those five strains were evaluated for their PGP capabilities in chickpea in the 2012–13 and 2013–14 post-rainy seasons. All of the Streptomyces sp. strains exhibited enhanced nodule number, nodule weight, root weight and shoot weight at 30 days after sowing (DAS) and pod number, pod weight, leaf area, leaf weight and stem weight at 60 DAS in both seasons over the un-inoculated control. At crop maturity, the Streptomyces strains had enhanced stover yield, grain yield, total dry matter and seed number plant−1 in both seasons over the un-inoculated control. In the rhizosphere, the Streptomyces sp. also significantly enhanced microbial biomass carbon, dehydrogenase activity, total nitrogen, available phosphorous and organic carbon in both seasons over the un-inoculated control. Of the five strains of Streptomyces sp., CAI-17, CAI-68 and CAI-78 were superior to KAI-26 and KAI-27 in terms of their effects on root and shoot development, nodule formation and crop productivity. Scanning electron microscopy (SEM) micrographs had revealed the success in colonization of the chickpea roots by all five strains. Quantitative real-time PCR (qRT-PCR) analysis of selected PGP genes of actinomycetes revealed the selective up-regulation of indole-3-acetic acid (IAA)-related and siderophore-related genes by CAI-68 and of β-1,3-glucanase genes by KAI-26