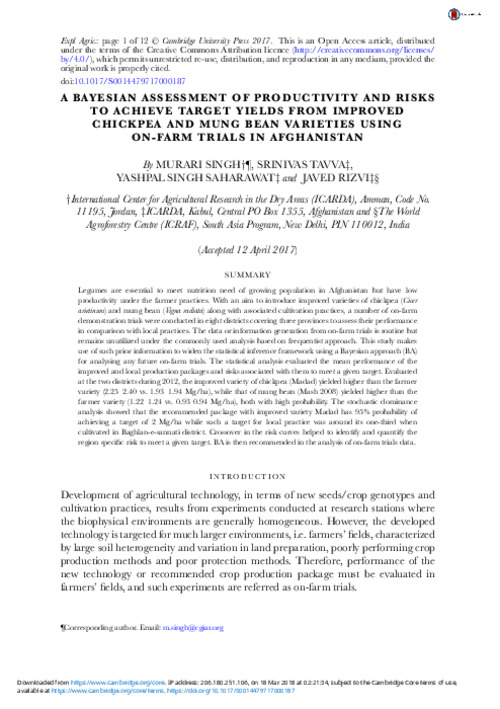 Legumes are essential to meet nutrition need of growing population in Afghanistan but have low productivity under the farmer practices. With an aim to introduce improved varieties of chickpea (Cicer arietinum) and mung bean (Vigna radiata) along with associated cultivation practices, a number of on-farm demonstration trials were conducted in eight districts covering three provinces to assess their performance in comparison with local practices. The data or information generation from on-farm trials is routine but remains unutilized under the commonly used analysis based on frequentist approach. This study makes use of such prior information to widen the statistical inference framework using a Bayesian approach (BA) for analysing any future on-farm trials. The statistical analysis evaluated the mean performance of the improved and local production packages and risks associated with them to meet a given target. Evaluated at the two districts during 2012, the improved variety of chickpea (Madad) yielded higher than the farmer variety (2.25–2.40 vs. 1.93–1.94 Mg/ha), while that of mung bean (Mash 2008) yielded higher than the farmer variety (1.22–1.24 vs. 0.93–0.94 Mg/ha), both with high probability. The stochastic dominance analysis showed that the recommended package with improved variety Madad has 95% probability of achieving a target of 2 Mg/ha while such a target for local practice was around its one-third when cultivated in Baghlan-e-sannati district. Crossover in the risk curves helped to identify and quantify the region specific risk to meet a given target. BA is then recommended in the analysis of on-farm trials data.