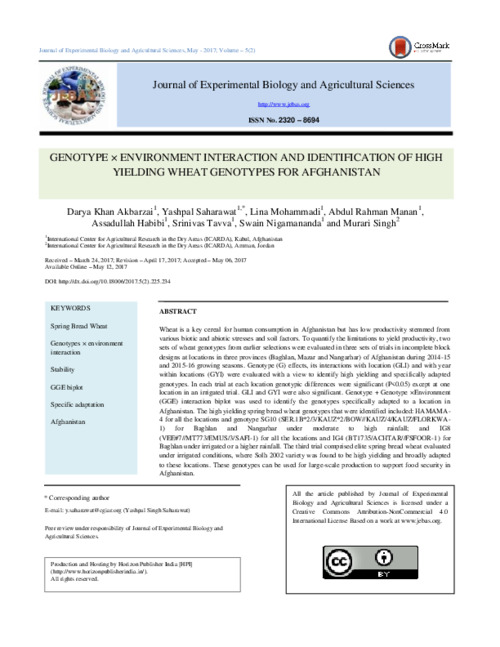 Wheat is a key cereal for human consumption in Afghanistan but has low productivity stemmed from various biotic and abiotic stresses and soil factors. To quantify the limitations to yield productivity, two sets of wheat genotypes from earlier selections were evaluated in three sets of trials in incomplete block designs at locations in three provinces (Baghlan, Mazar and Nangarhar) of Afghanistan during 2014-15 and 2015-16 growing seasons. Genotype (G) effects, its interactions with location (GLI) and with year within locations (GYI) were evaluated with a view to identify high yielding and specifically adapted genotypes. In each trial at each location genotypic differences were significant (P<0.05) except at one location in an irrigated trial. GLI and GYI were also significant. Genotype + Genotype ×Environment (GGE) interaction biplot was used to identify the genotypes specifically adapted to a location in Afghanistan. The high yielding spring bread wheat genotypes that were identified included: HAMAMA4 for all the locations and genotype SG10 (SER.1B*2/3/KAUZ*2/BOW//KAUZ/4/KAUZ/FLORKWA1) for Baghlan and Nangarhar under moderate to high rainfall; and IG8 (VEE#7//MT773/EMUS/3/SAFI-1) for all the locations and IG4 (BT1735/ACHTAR//FSFOOR-1) for Baghlan under irrigated or a higher rainfall. The third trial comprised elite spring bread wheat evaluated under irrigated conditions, where Solh 2002 variety was found to be high yielding and broadly adapted to these locations. These genotypes can be used for large-scale production to support food security in Afghanistan.