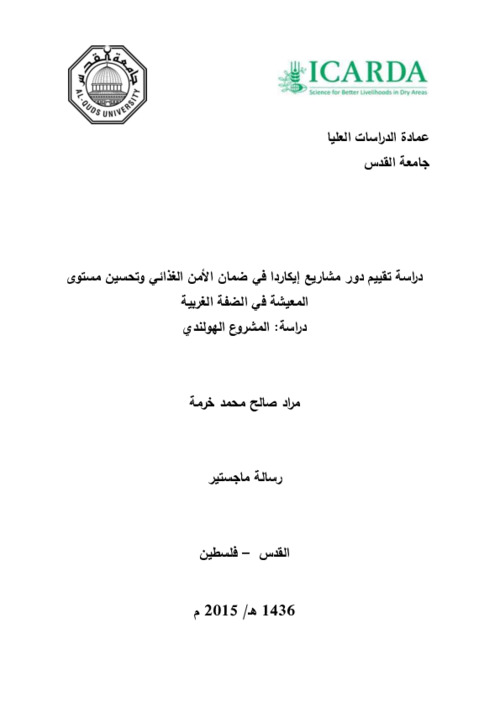 This study was conducted during the period from June 2013 to November 2014, It aims to evaluate the role of the International Center for Agricultural Researches in the Dry Areas (ICARDA) projects in enhancing food security and livelihoods in the West bank. In order to achieve this objective, the study focused on conducting a terminal evaluation for the Netherlands project titled “increased productivity and sustainability of rainfed food crops and improve efficiency of the seed production system in West- Bank to ensure food security and livelihoods of farmers”. This research-development project was funded by Netherlands government, supervised by ICARDA and implemented by The National Palestinian Center for Agricultural Researches (NARC) with the participation of other stakeholders from March 2010 to October 2013. Although the population of the study comprised the beneficiaries, implementers and decision makers, the beneficiaries were the main target of the study because they were the recipients of the services. They were residing in 49 localities, mostly villages, in six governorates (Jenin, Tubas, Ramallah, Jerusalem, Hebron, Tulkarem). The services that were delivered consisted of improved seeds, fertilizers, herbicides and various kinds of training. The study has adopted the analytical descriptive method. As such, a comprehensive survey for the population members was executed, with the main questionnaire designed to measure the evaluation criteria through a group of questions addressed to beneficiaries. The approach used to fill out the questionnaires was a face to face one. 130 out of 160 beneficiaries (the whole population) have filled them. In addition, 17 structured interviews were conducted with implementers based on a predesigned form tailored for them, and 8 decision makers were also interviewed based on another prepared form. The qualitative and quantitative methods have been adopted in order to approximate results to reality as much as possible. To achieve this objective, three beneficiary focus groups were formed at the project areas. Descriptive, deductive and inductive methods were used to analyze the data, and the grouping approach was used to analyze the conditional and open-ended questions. The SPSS (Statistical Package for Social Science, V20) software was used to reach the first objective, and Excel for the second. The results revealed that the project relevance criterion which is related to the policies, the national priorities and the beneficiaries’ needs was rated above average. The responses to the question whether the way of the project implementation was the best way or there could be a better way were 52% percent for Yes, while 25% said the monitoring of the project could be better. However, the decision makers and implementers responded positively to the same question. The beneficiary rating of the knowledge and experiences of the implementers was good. There was a statistically significant difference in the means of beneficiaries’ profitability regarding efficiency, which was attributed to the best quality of the improved seeds. On the other hand, no significant differences as to the training factor were recorded. A comparison between this study, the initial baseline study and the final report of the project has indicated that there has been no reduction in the production inputs. On the contrary, there was a rise in the returns for wheat, barley and chickpea crops. In addition, the comparison revealed that there would be no big differences between production inputs and returns after the addition of land rent to the production inputs. This means that the implementation agency should disseminate the various kinds of training equally for all beneficiaries as well as increase monitoring of the projects. The estimated prediction which was done in this study has indicated a feasibility of investment in the improved seeds sector, in addition to a promising potential in the cultivation of watermelon, providing that the farmers are protected from the infiltration of smuggled and illegal crops to the local market. It was also revealed that the sustainability criterion had a strong effect on the two dependent variables of food security and livelihoods. The responses of beneficiaries have revealed that the impact of the project was weak, this weakness was reflected on food security and livelihood variables, due to the strong relation between the impact criterion and these two variables. The reason for this was that the mid-term and long term impacts were not fulfilled because they are envisaged to appear after two to three years. With respect to the project’s performance, the implementers’ responses have indicated that it was good. The study has come up with a number of key recommendations. Firstly, ICARDA should require implementers to recruit only full time project officers, and to include farmers with large holdings within the groups of seed producers. Second, NARC is encouraged to readopt the methods that were used in this project to define the beneficiary’s priorities and needs. However, the study does not recommend the expansion of such projects to other areas that were not included in the initial studies and the project plan because this would lead to the fragmentation of the project. Third, it recommends the Palestinian Ministry of Agriculture (MOA) to establish a semi-governmental body to supervise the seeds distribution and retrieval in order to organize this important sector to become appropriate for investment. Fourth, it recommends stakeholders as a whole to be fully engaged in the projects, because their primary mission is to serve farmers and the country at large. Fifth, it recommends the Palestinian universities to direct Master’s students who have the relevant specializations towards the evaluation of development projects. Six, researchers and evaluators are recommended to adopt the evaluation criteria used in this study and link it with the evaluation indicators and project logframe. Finally, the Palestinian government is encouraged to design a project evaluation guide to be used in Palestine, and facilitate the establishment of independent and impartial institution to evaluate the projects objectively.