Morphological and physiological responses of halophytes: Atriplex halimus, A. lentiformis, A. nummularia, Amaranthus caudatus and Chenopodium quinoa Willd. to increasing levels of salinity 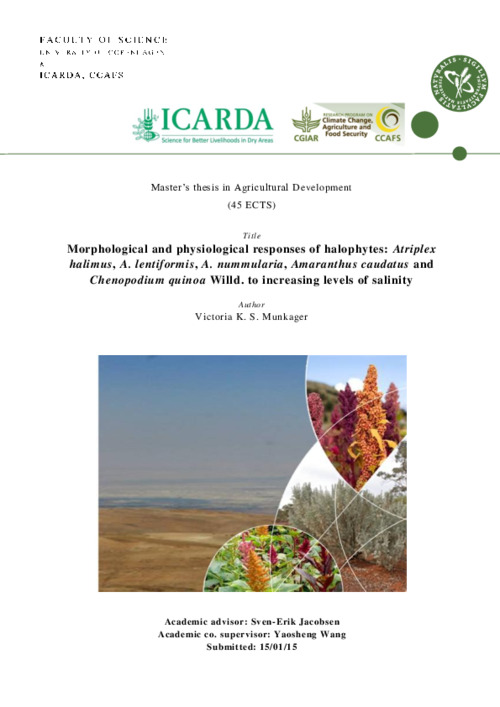 7 % of the world’s agricultural lands are adversely affected by salinity, a state that makes them less capable of supporting agricultural systems. Assessing growth and physiological mechanisms associated with high tolerance in halophytes may provide useful tools in understanding and breeding for salinity tolerance as well as assisting in providing alternative underutilized candidates for reclamation and remediation of saline soils. This study evaluated the salinity tolerance of five halophytes: Atriplex halimus, A. lentiformis, A. nummularia, Amaranthus caudatus and Chenopodium quinoa Willd. variety titicaca exposed to moderate to severe levels of salinity. 25 days after sowing, seedlings were exposed to 5 different levels of salinity with electrical conductivity values of the saturated paste ranging from 8.7 dS/m to 105.8 dS/m. After approx. eight weeks of salinity exposure growth, plant water relations, water use efficiency, stomatal resistance, chlorophyll content and total leaf Na+ and K+ were measured. None of the five species survived more than 23 days of salinity exposure at the two highest salinity levels. Although significant growth reductions in response to increasing salinity were observed for all species there were clear between-species distinctions to be made pertaining to the degree of salinity stress experienced by the plants and which underlying mechanisms were mostly affected. Amaranth and quinoa were found to be Na+ includers consequently altering the ratio between leaf K+/Na+ and inducing premature leaf senescence due to ionic stress. Contrastingly, all three atriplex species were found to be Na+ excluders indicating that control of Na+ uptake and transport plays an essential role in the salinity tolerance of atriplex. The stomatal resistance was adversely affected in nummularia, amaranth and quinoa and to some extent in halimus and lentiformis indicating that increasing salinity provokes a water conserving strategy in the plants which resulted in either unaltered or improved water status in all of the species. Reductions in chlorophyll content in response to salinity were observed in some but not all of the species and it is hypothesize that in quinoa, a C3, and amaranth, a C3-C4, species chlorophyll content reductions lower the risk of photoinhibition under salinity-induced stomatal-limiting photosynthesis inhibition. Overall it can be concluded the significant differences in plant response, both morphological and physiological, to salinity exists, not only between species, but also within the same species over a salinity exposure gradient of EC: 8.7-26.8 dS/m.