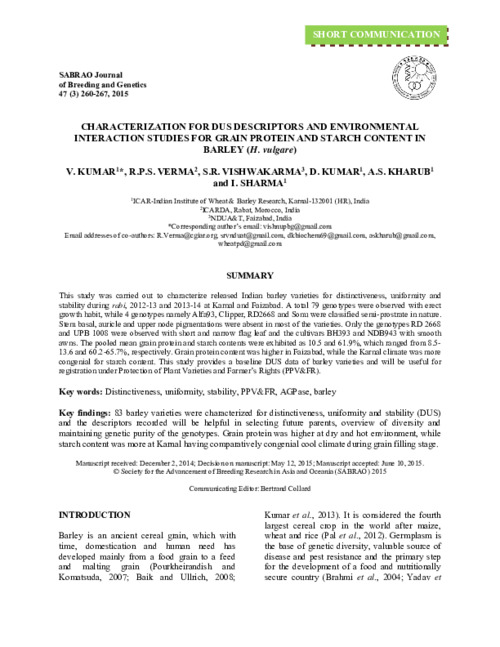 This study was carried out to characterize released Indian barley varieties for distinctiveness, uniformity and stability during rabi, 2012-13 and 2013-14 at Karnal and Faizabad. A total 79 genotypes were observed with erect growth habit, while 4 genotypes namely Alfa93, Clipper, RD2668 and Sonu were classified semi-prostrate in nature. Stem basal, auricle and upper node pigmentations were absent in most of the varieties. Only the genotypes RD 2668 and UPB 1008 were observed with short and narrow flag leaf and the cultivars BH393 and NDB943 with smooth awns. The pooled mean grain protein and starch contents were exhibited as 10.5 and 61.9%, which ranged from 8.5- 13.6 and 60.2-65.7%, respectively. Grain protein content was higher in Faizabad, while the Karnal climate was more congenial for starch content. This study provides a baseline DUS data of barley varieties and will be useful for registration under Protection of Plant Varieties and Farmer’s Rights (PPV&FR).