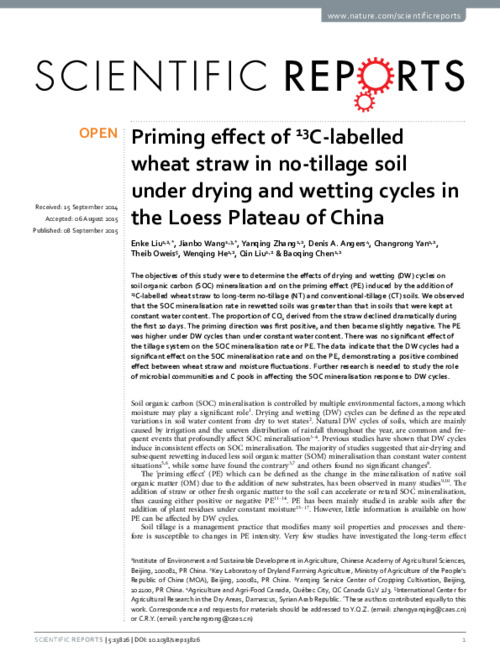 he objectives of this study were to determine the effects of drying and wetting (DW) cycles on soil organic carbon (SOC) mineralisation and on the priming effect (PE) induced by the addition of 13C-labelled wheat straw to long-term no-tillage (NT) and conventional-tillage (CT) soils. We observed that the SOC mineralisation rate in rewetted soils was greater than that in soils that were kept at constant water content. The proportion of CO2 derived from the straw declined dramatically during the first 10 days. The priming direction was first positive, and then became slightly negative. The PE was higher under DW cycles than under constant water content. There was no significant effect of the tillage system on the SOC mineralisation rate or PE. The data indicate that the DW cycles had a significant effect on the SOC mineralisation rate and on the PE, demonstrating a positive combined effect between wheat straw and moisture fluctuations. Further research is needed to study the role of microbial communities and C pools in affecting the SOC mineralisation response to DW cycles.