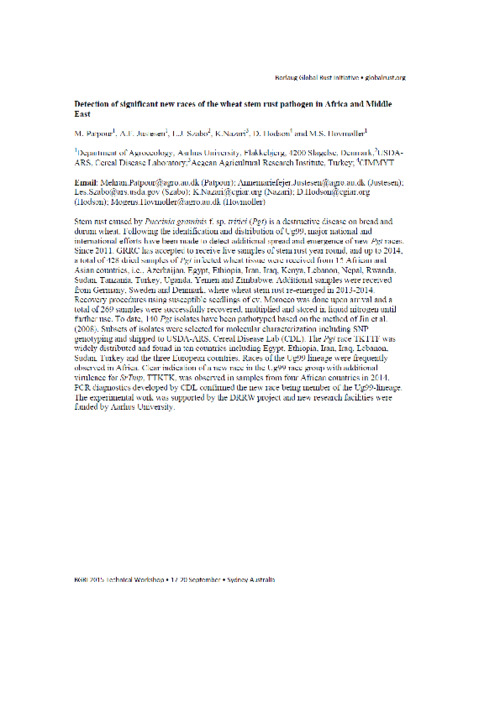 Stem rust caused by Puccinia graminis f. sp. tritici (Pgt) is a destructive disease on bread and durum wheat. Following the identification and distribution of Ug99, major national and international efforts have been made to detect additional spread and emergence of new Pgt races. Since 2011, GRRC has accepted to receive live samples of stem rust year round, and up to 2014, a total of 428 dried samples of Pgt infected wheat tissue were received from 15 African and Asian countries, i.e., Azerbaijan, Egypt, Ethiopia, Iran, Iraq, Kenya, Lebanon, Nepal, Rwanda, Sudan, Tanzania, Turkey, Uganda, Yemen and Zimbabwe. Additional samples were received from Germany, Sweden and Denmark, where wheat stem rust re-emerged in 2013-2014. Recovery procedures using susceptible seedlings of cv. Morocco was done upon arrival and a total of 269 samples were successfully recovered, multiplied and stored in liquid nitrogen until further use. To date, 140 Pgt isolates have been pathotyped based on the method of Jin et al. (2008). Subsets of isolates were selected for molecular characterization including SNP genotyping and shipped to USDA-ARS, Cereal Disease Lab (CDL). The Pgt race TKTTF was widely distributed and found in ten countries including Egypt, Ethiopia, Iran, Iraq, Lebanon, Sudan, Turkey and the three European countries. Races of the Ug99 lineage were frequently observed in Africa. Clear indication of a new race in the Ug99 race group with additional virulence for SrTmp, TTKTK, was observed in samples from four African countries in 2014. PCR diagnostics developed by CDL confirmed the new race being member of the Ug99-lineage. The experimental work was supported by the DRRW project and new research facilities were funded by Aarhus University.