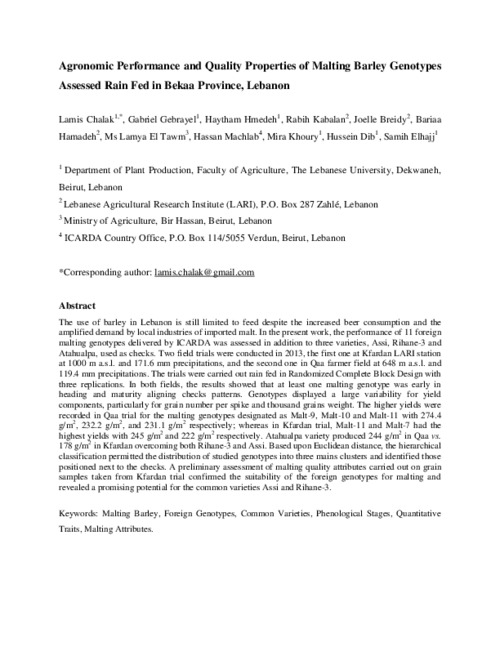 The use of barley in Lebanon is still limited to feed despite the increased beer consumption and the amplified demand by local industries of imported malt. In the present work, the performance of 11 foreign malting genotypes delivered by ICARDA was assessed in addition to three varieties, Assi, Rihane-3 and Atahualpa, used as checks. Two field trials were conducted in 2013, the first one at Kfardan LARI station at 1000 m a.s.l. and 171.6 mm precipitations, and the second one in Qaa farmer field at 648 m a.s.l. and 119.4 mm precipitations. The trials were carried out rain fed in Randomized Complete Block Design with three replications. In both fields, the results showed that at least one malting genotype was early in heading and maturity aligning checks patterns. Genotypes displayed a large variability for yield components, particularly for grain number per spike and thousand grains weight. The higher yields were recorded in Qaa trial for the malting genotypes designated as Malt-9, Malt-10 and Malt-11 with 274.4 g/m2, 232.2 g/m2, and 231.1 g/m2 respectively; whereas in Kfardan trial, Malt-11 and Malt-7 had the highest yields with 245 g/m2 and 222 g/m2 respectively. Atahualpa variety produced 244 g/m2 in Qaa vs. 178 g/m2 in Kfardan overcoming both Rihane-3 and Assi. Based upon Euclidean distance, the hierarchical classification permitted the distribution of studied genotypes into three mains clusters and identified those positioned next to the checks. A preliminary assessment of malting quality attributes carried out on grain samples taken from Kfardan trial confirmed the suitability of the foreign genotypes for malting and revealed a promising potential for the common varieties Assi and Rihane-3.