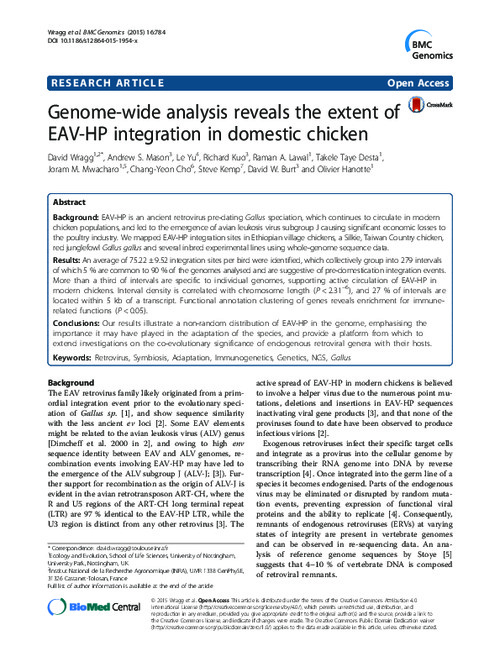 Background: EAV-HP is an ancient retrovirus pre-dating Gallus speciation, which continues to circulate in modern chicken populations, and led to the emergence of avian leukosis virus subgroup J causing significant economic losses to the poultry industry. We mapped EAV-HP integration sites in Ethiopian village chickens, a Silkie, Taiwan Country chicken, red junglefowl Gallus gallus and several inbred experimental lines using whole-genome sequence data. Results: An average of 75.22 ± 9.52 integration sites per bird were identified, which collectively group into 279 intervals of which 5 % are common to 90 % of the genomes analysed and are suggestive of pre-domestication integration events. More than a third of intervals are specific to individual genomes, supporting active circulation of EAV-HP in modern chickens. Interval density is correlated with chromosome length (P < 2.31−6), and 27 % of intervals are located within 5 kb of a transcript. Functional annotation clustering of genes reveals enrichment for immunerelated functions (P < 0.05). Conclusions: Our results illustrate a non-random distribution of EAV-HP in the genome, emphasising the importance it may have played in the adaptation of the species, and provide a platform from which to extend investigations on the co-evolutionary significance of endogenous retroviral genera with their hosts.