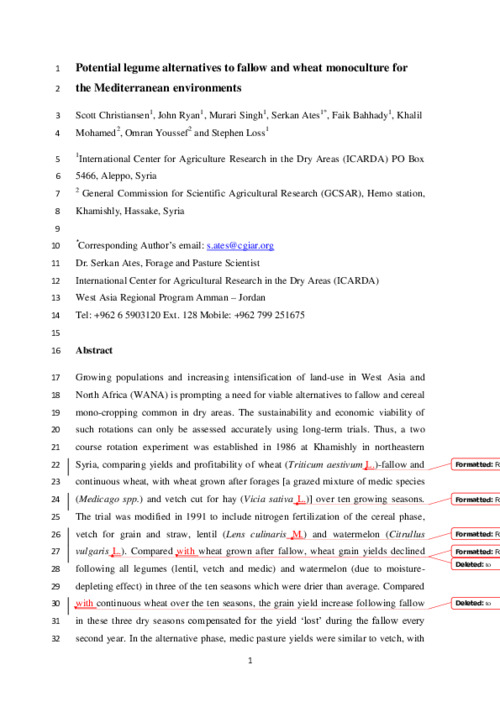 Growing populations and intensification of land-use in West Asia and North Africa (WANA) are prompting a need for viable alternatives to fallow and cereal mono-cropping systems common in dry areas of this region. The sustainability and economic viability of such rotations can only be assessed accurately by using long-term trials.Atwo-course rotation experiment was established in 1986 in north-eastern Syria, comparing yields and profitability of wheat (Triticum aestivum L.) when grown after wheat, fallow, a grazed mixture of medic species (Medicago spp.) and common vetch (Vicia sativa L.) cut for hay, over 10 growing seasons. Lentils (Lens culinaris Medik.) were introduced into the experiment in 1990. On average over the course of the experiment, the highest wheat grain yields were obtained following fallow (2.57 t ha–1), the lowest in continuous wheat (1.14 t ha–1), and intermediate following medic and vetch (1.90–2.01 t ha–1). Compared with wheat grown after fallow, wheat grain yields declined following vetch, medic and lentils in only three of the 10 seasons, which were drier than average. Yields of wheat after lentils were generally lower (2.22 t ha–1) than after vetch (mean 2.56 t ha–1) and after medic (2.40 t ha–1). Inclusion of grain legumes in the rotations boosted profits considerably because of their high grain prices and valuable straw. Replacing fallow with vetch for hay production increased the average gross margin by US$126 ha–1 year–1, and growing vetch for hay in rotation with wheat produced greater profit than continuous wheat, by $254 ha–1 year–1. The wheat–vetch-for-grain and wheat–lentil rotations were especially profitable, at least twice as profitable as wheat–fallow and three times continuous wheat. This experiment adds to the growing body of field data in Syria and in Australia showing that forage and grain legumes are excellent alternatives to wheat–fallow rotation and continuous wheat production in areas that experience a Mediterranean-type climate, and help support more efficient and sustainable cropping systems.