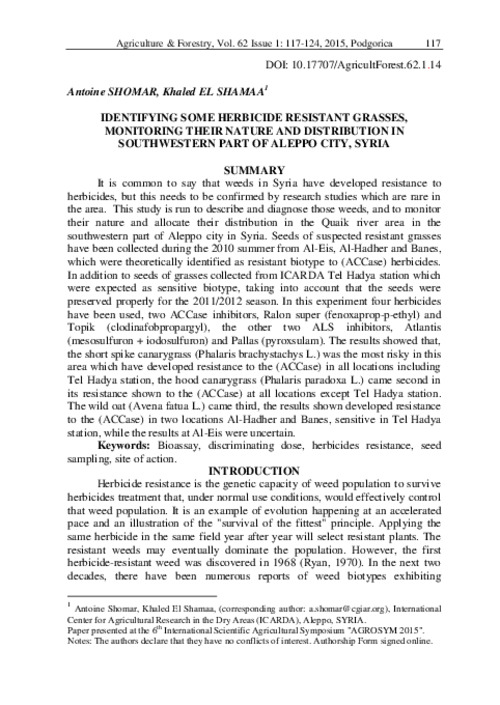 It is common to say that weeds in Syria have developed resistance to herbicides, but this needs to be confirmed by research studies which are rare in the area. This study is run to describe and diagnose those weeds, and to monitor their nature and allocate their distribution in the Quaik river area in the southwestern part of Aleppo city in Syria. Seeds of suspected resistant grasses have been collected during the 2010 summer from Al-Eis, Al-Hadher and Banes, which were theoretically identified as resistant biotype to (ACCase) herbicides. In addition to seeds of grasses collected from ICARDA Tel Hadya station which were expected as sensitive biotype, taking into account that the seeds were preserved properly for the 2011/2012 season. In this experiment four herbicides have been used, two ACCase inhibitors, Ralon super (fenoxaprop-p-ethyl) and Topik (clodinafobpropargyl), the other two ALS inhibitors, Atlantis (mesosulfuron + iodosulfuron) and Pallas (pyroxsulam). The results showed that, the short spike canarygrass (Phalaris brachystachys L.) was the most risky in this area which have developed resistance to the (ACCase) in all locations including Tel Hadya station, the hood canarygrass (Phalaris paradoxa L.) came second in its resistance shown to the (ACCase) at all locations except Tel Hadya station. The wild oat (Avena fatua L.) came third, the results shown developed resistance to the (ACCase) in two locations Al-Hadher and Banes, sensitive in Tel Hadya station, while the results at Al-Eis were uncertain.