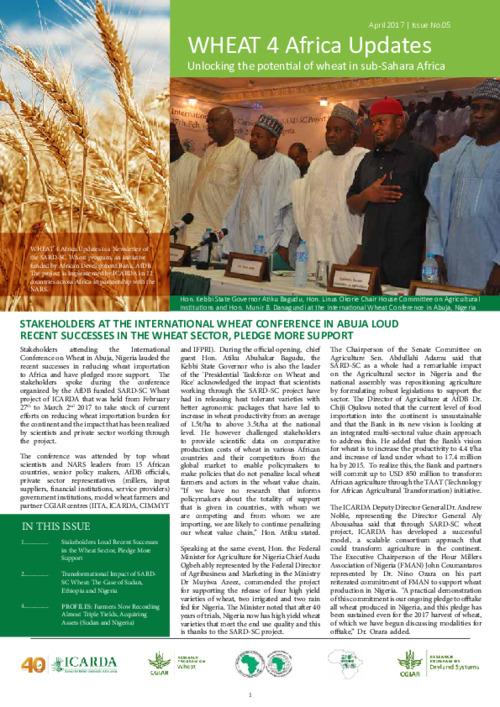 Stakeholders attending the International Conference on Wheat in Abuja, Nigeria lauded the recent successes in reducing wheat importation to Africa and have pledged more support. The stakeholders spoke during the conference organized by the AfDB funded SARD-SC Wheat project of ICARDA that was held from February 27th to March 2nd 2017 to take stock of current efforts on reducing wheat importation burden for the continent and the impact that has been realized by scientists and private sector working through the project. The conference was attended by top wheat scientists and NARS leaders from 15 African countries, senior policy makers, AfDB officials, private sector representatives (millers, input suppliers, financial institutions, service providers) government institutions, model wheat farmers and partner CGIAR centres (IITA, ICARDA, CIMMYT and IFPRI). During the official opening, chief guest Hon. Atiku Abubakar Bagudu, the Kebbi State Governor who is also the leader of the 'Presidential Taskforce on Wheat and Rice' acknowledged the impact that scientists working through the SARD-SC project have had in releasing heat tolerant varieties with better agronomic packages that have led to increase in wheat productivity from an average of 1.5t/ha to above 3.5t/ha at the national level. He however challenged stakeholders to provide scientific data on comparative production costs of wheat in various African countries and their competitors from the global market to enable policymakers to make policies that do not penalize local wheat farmers and actors in the wheat value chain.