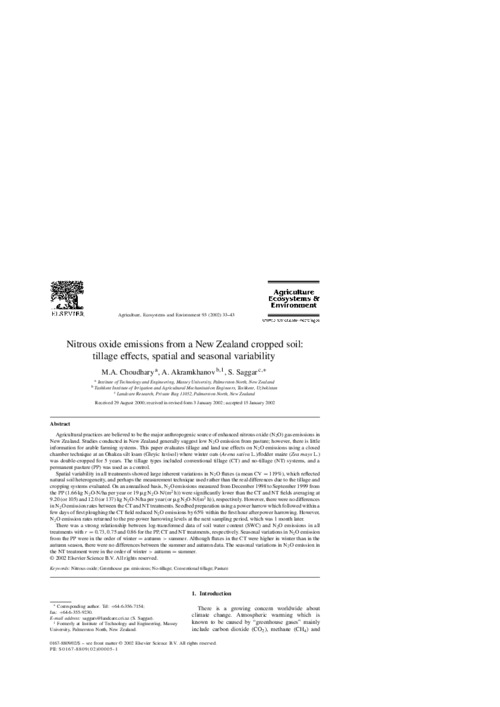 Agricultural practices are believed to be the major anthropogenic source of enhanced nitrous oxide (N2O) gas emissions in New Zealand. Studies conducted in New Zealand generally suggest low N2O emission from pasture; however, there is little information for arable farming systems. This paper evaluates tillage and land use effects on N2O emissions using a closed chamber technique at an Ohakea silt loam (Gleyic luvisol) where winter oats (Avena sativa L.)/fodder maize (Zea mays L.) was double-cropped for 5 years. The tillage types included conventional tillage (CT) and no-tillage (NT) systems, and a permanent pasture (PP) was used as a control. Spatial variability in all treatments showed large inherent variations in N2O fluxes (a mean CV = 119%), which reflected natural soil heterogeneity, and perhaps the measurement technique used rather than the real differences due to the tillage and cropping systems evaluated. On an annualised basis, N2O emissions measured from December 1998 to September 1999 from the PP (1.66 kg N2O-N/ha per year or 19 g N2O-N/(m2 h)) were significantly lower than the CT and NT fields averaging at 9.20 (or 105) and 12.0 (or 137) kg N2O-N/ha per year (or gN2O-N/(m2 h)), respectively. However, there were no differences in N2O emission rates between the CT and NT treatments. Seedbed preparation using a power harrow which followed within a few days of first ploughing the CT field reduced N2O emissions by 65% within the first hour after power harrowing. However, N2O emission rates returned to the pre-power harrowing levels at the next sampling period, which was 1 month later. There was a strong relationship between log-transformed data of soil water content (SWC) and N2O emissions in all treatments with r = 0.73, 0.75 and 0.86 for the PP, CT and NT treatments, respectively. Seasonal variations in N2O emission from the PP were in the order of winter = autumn > summer. Although fluxes in the CT were higher in winter than in the autumn season, there were no differences between the summer and autumn data. The seasonal variations in N2O emission in the NT treatment were in the order of winter > autumn = summer. © 2002 Elsevier Science B.V. All rights reserved.