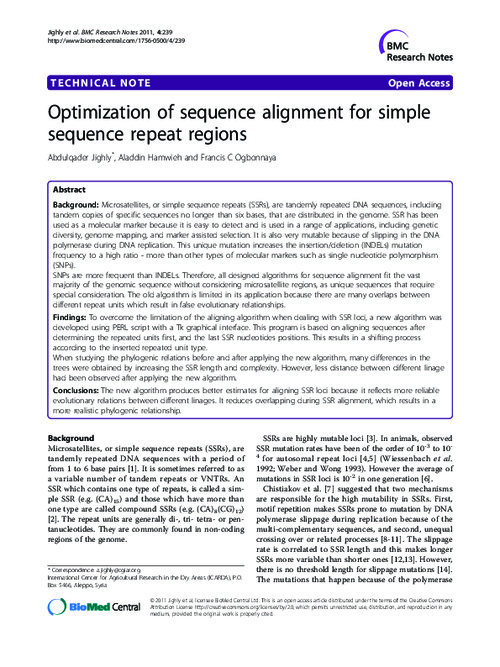 Background: Microsatellites, or simple sequence repeats (SSRs), are tandemly repeated DNA sequences, including tandem copies of specific sequences no longer than six bases, that are distributed in the genome. SSR has been used as a molecular marker because it is easy to detect and is used in a range of applications, including genetic diversity, genome mapping, and marker assisted selection. It is also very mutable because of slipping in the DNA polymerase during DNA replication. This unique mutation increases the insertion/deletion (INDELs) mutation frequency to a high ratio - more than other types of molecular markers such as single nucleotide polymorphism (SNPs). SNPs are more frequent than INDELs. Therefore, all designed algorithms for sequence alignment fit the vast majority of the genomic sequence without considering microsatellite regions, as unique sequences that require special consideration. The old algorithm is limited in its application because there are many overlaps between different repeat units which result in false evolutionary relationships. Findings: To overcome the limitation of the aligning algorithm when dealing with SSR loci, a new algorithm was developed using PERL script with a Tk graphical interface. This program is based on aligning sequences after determining the repeated units first, and the last SSR nucleotides positions. This results in a shifting process according to the inserted repeated unit type. When studying the phylogenic relations before and after applying the new algorithm, many differences in the trees were obtained by increasing the SSR length and complexity. However, less distance between different linage had been observed after applying the new algorithm. Conclusions: The new algorithm produces better estimates for aligning SSR loci because it reflects more reliable evolutionary relations between different linages. It reduces overlapping during SSR alignment, which results in a more realistic phylogenic relationship.