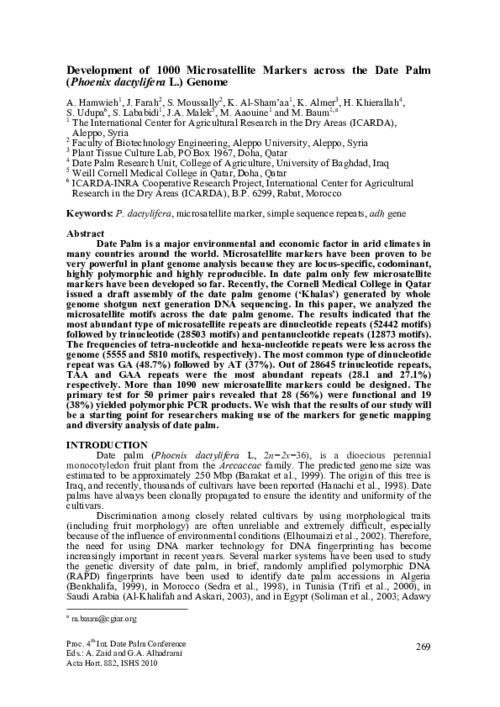 Date Palm is a major environmental and economic factor in arid climates in many countries around the world. Microsatellite markers have been proven to be very powerful in plant genome analysis because they are locus-specific, codominant, highly polymorphic and highly reproducible. In date palm only few microsatellite markers have been developed so far. Recently, the Cornell Medical College in Qatar issued a draft assembly of the date palm genome (‘Khalas’) generated by whole genome shotgun next generation DNA sequencing. In this paper, we analyzed the microsatellite motifs across the date palm genome. The results indicated that the most abundant type of microsatellite repeats are dinucleotide repeats (52442 motifs) followed by trinucleotide (28503 motifs) and pentanucleotide repeats (12873 motifs). The frequencies of tetra-nucleotide and hexa-nucleotide repeats were less across the genome (5555 and 5810 motifs, respectively). The most common type of dinucleotide repeat was GA (48.7%) followed by AT (37%). Out of 28645 trinucleotide repeats, TAA and GAA repeats were the most abundant repeats (28.1 and 27.1%) respectively. More than 1090 new microsatellite markers could be designed. The primary test for 50 primer pairs revealed that 28 (56%) were functional and 19 (38%) yielded polymorphic PCR products. We wish that the results of our study will be a starting point for researchers making use of the markers for genetic mapping and diversity analysis of date palm.