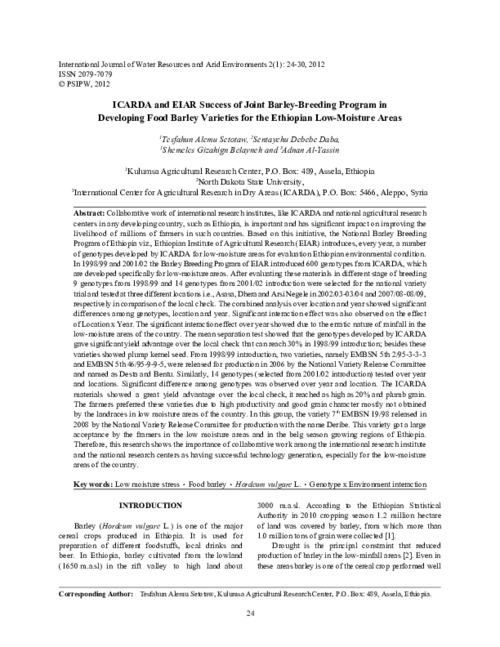 Collaborative work of international research institutes, like ICARDA and national agricultural research centers in any developing country, such as Ethiopia, is important and has significant impact on improving the livelihood of millions of farmers in such countries. Based on this initiative, the National Barley Breeding Program of Ethiopia viz., Ethiopian Institute of Agricultural Research (EIAR) introduces, every year, a number of genotypes developed by ICARDA for low-moisture areas for evaluation Ethiopian environmental condition. In 1998/99 and 2001/02 the Barley Breeding Program of EIAR introduced 600 genotypes from ICARDA, which are developed specifically for low-moisture areas. After evaluating these materials in different stage of breeding 9 genotypes from 1998/99 and 14 genotypes from 2001/02 introduction were selected for the national variety trial and tested at three different locations i.e., Asasa, Dhera and Arsi Negele in 2002/03-03/04 and 2007/08-08/09, respectively in comparison of the local check. The combined analysis over location and year showed significant differences among genotypes, location and year. Significant interaction effect was also observed on the effect of Location x Year. The significant interaction effect over year showed due to the erratic nature of rainfall in the low-moisture areas of the country. The mean separation test showed that the genotypes developed by ICARDA gave significant yield advantage over the local check that can reach 30% in 1998/99 introduction; besides these varieties showed plump kernel seed. From 1998/99 introduction, two varieties, namely EMBSN 5th 2/95-3-3-3 and EMBSN 5th 46/95-9-9-5, were released for production in 2006 by the National Variety Release Committee and named as Desta and Bentu. Similarly, 14 genotypes (selected from 2001/02 introduction) tested over year and locations. Significant difference among genotypes was observed over year and location. The ICARDA materials showed a great yield advantage over the local check, it reached as high as 20% and plumb grain. The farmers preferred these varieties due to high productivity and good grain character mostly not obtained by the landraces in low moisture areas of the country. In this group, the variety 7 EMBSN 19/98 released in th 2008 by the National Variety Release Committee for production with the name Deribe. This variety got a large acceptance by the framers in the low moisture areas and in the belg season growing regions of Ethiopia. Therefore, this research shows the importance of collaborative work among the international research institute and the national research centers as having successful technology generation, especially for the low-moisture areas of the country