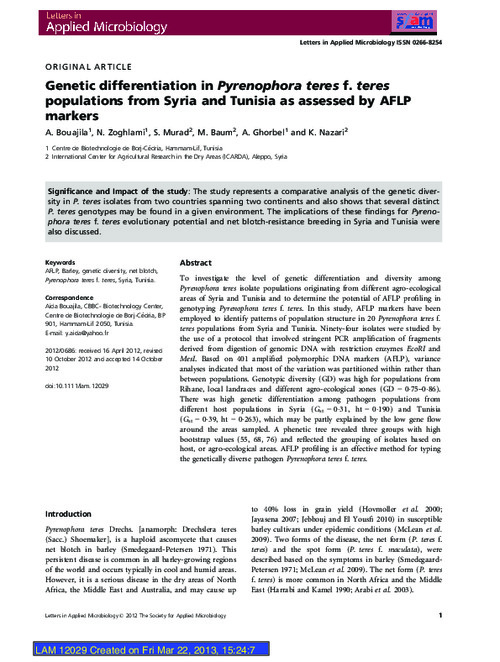 To investigate the level of genetic differentiation and diversity among Pyrenophora teres isolate populations originating from different agro-ecological areas of Syria and Tunisia and to determine the potential of AFLP profiling in genotyping Pyrenophora teres f. teres. In this study, AFLP markers have been employed to identify patterns of population structure in 20 Pyrenophora teres f. teres populations from Syria and Tunisia. Ninety-four isolates were studied by the use of a protocol that involved stringent PCR amplification of fragments derived from digestion of genomic DNA with restriction enzymes EcoRI and MesI. Based on 401 amplified polymorphic DNA markers (AFLP), variance analyses indicated that most of the variation was partitioned within rather than between populations. Genotypic diversity (GD) was high for populations from Rihane, local landraces and different agro-ecological zones (GD = 0 75–0 86). There was high genetic differentiation among pathogen populations from different host populations in Syria (Gst = 0 31, ht = 0 190) and Tunisia (Gst = 0 39, ht = 0 263), which may be partly explained by the low gene flow around the areas sampled. A phenetic tree revealed three groups with high bootstrap values (55, 68, 76) and reflected the grouping of isolates based on host, or agro-ecological areas. AFLP profiling is an effective method for typing the genetically diverse pathogen Pyrenophora teres f. teres.