Spatial and Temporal Analyses of Water Quality in the Dhrabi Watershed of Pakistan: Issues and Options 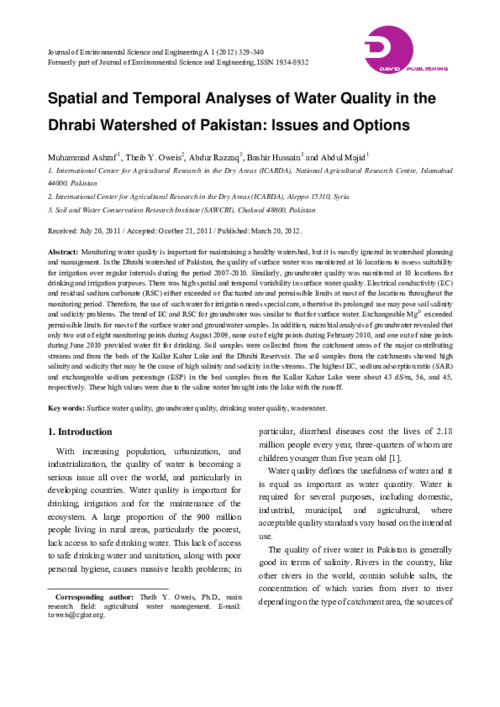 Monitoring water quality is important for maintaining a healthy watershed, but it is mostly ignored in watershed planning and management. In the Dhrabi watershed of Pakistan, the quality of surface water was monitored at 16 locations to assess suitability for irrigation over regular intervals during the period 2007-2010. Similarly, groundwater quality was monitored at 10 locations for drinking and irrigation purposes. There was high spatial and temporal variability in surface water quality. Electrical conductivity (EC) and residual sodium carbonate (RSC) either exceeded or fluctuated around permissible limits at most of the locations throughout the monitoring period. Therefore, the use of such water for irrigation needs special care, otherwise its prolonged use may pose soil salinity and sodicity problems. The trend of EC and RSC for groundwater was similar to that for surface water. Exchangeable Mg2+ exceeded permissible limits for most of the surface water and groundwater samples. In addition, microbial analysis of groundwater revealed that only two out of eight monitoring points during August 2009, none out of eight points during February 2010, and one out of nine points during June 2010 provided water fit for drinking. Soil samples were collected from the catchment areas of the major contributing streams and from the beds of the Kallar Kahar Lake and the Dhrabi Reservoir. The soil samples from the catchments showed high salinity and sodicity that may be the cause of high salinity and sodicity in the streams. The highest EC, sodium adsorption ratio (SAR) and exchangeable sodium percentage (ESP) in the bed samples from the Kallar Kahar Lake were about 43 dS/m, 56, and 45, respectively. These high values were due to the saline water brought into the lake with the runoff.