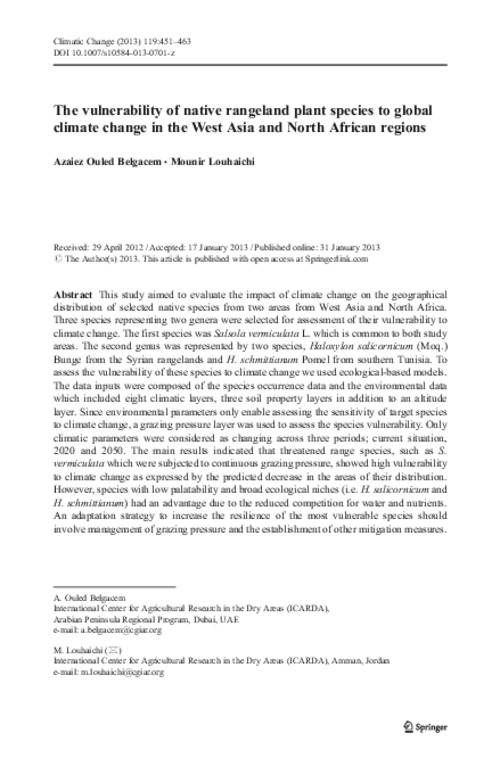 This study aimed to evaluate the impact of climate change on the geographical distribution of selected native species from two areas from West Asia and North Africa. Three species representing two genera were selected for assessment of their vulnerability to climate change. The first species was Salsola vermiculata L. which is common to both study areas. The second genus was represented by two species, Haloxylon salicornicum (Moq.) Bunge from the Syrian rangelands and H. schmittianum Pomel from southern Tunisia. To assess the vulnerability of these species to climate change we used ecological-based models. The data inputs were composed of the species occurrence data and the environmental data which included eight climatic layers, three soil property layers in addition to an altitude layer. Since environmental parameters only enable assessing the sensitivity of target species to climate change, a grazing pressure layer was used to assess the species vulnerability. Only climatic parameters were considered as changing across three periods; current situation, 2020 and 2050. The main results indicated that threatened range species, such as S. vermiculata which were subjected to continuous grazing pressure, showed high vulnerability to climate change as expressed by the predicted decrease in the areas of their distribution. However, species with low palatability and broad ecological niches (i.e. H. salicornicum and H. schmittianum) had an advantage due to the reduced competition for water and nutrients. An adaptation strategy to increase the resilience of the most vulnerable species should involve management of grazing pressure and the establishment of other mitigation measures