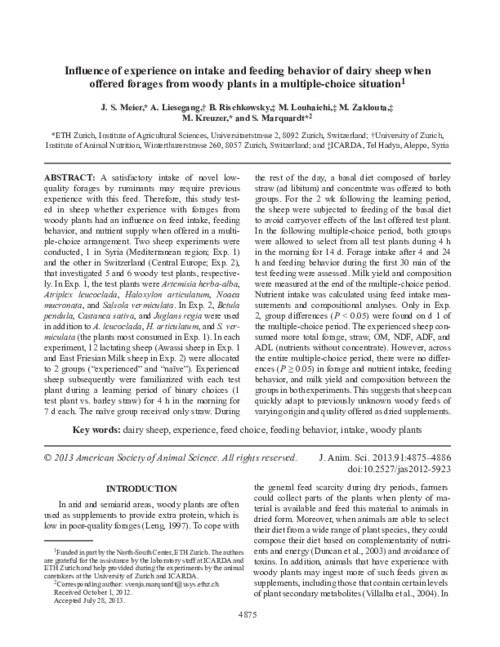 A satisfactory intake of novel lowquality forages by ruminants may require previous experience with this feed. Therefore, this study tested in sheep whether experience with forages from woody plants had an influence on feed intake, feeding behavior, and nutrient supply when offered in a multiple- choice arrangement. Two sheep experiments were conducted, 1 in Syria (Mediterranean region; Exp. 1) and the other in Switzerland (Central Europe; Exp. 2), that investigated 5 and 6 woody test plants, respectively. In Exp. 1, the test plants were Artemisia herba-alba, Atriplex leucoclada, Haloxylon articulatum, Noaea mucronata, and Salsola vermiculata. In Exp. 2, Betula pendula, Castanea sativa, and Juglans regia were used in addition to A. leucoclada, H. articulatum, and S. vermiculata (the plants most consumed in Exp. 1). In each experiment, 12 lactating sheep (Awassi sheep in Exp. 1 and East Friesian Milk sheep in Exp. 2) were allocated to 2 groups (“experienced” and “naïve”). Experienced sheep subsequently were familiarized with each test plant during a learning period of binary choices (1 test plant vs. barley straw) for 4 h in the morning for 7 d each. The naïve group received only straw. During the rest of the day, a basal diet composed of barley straw (ad libitum) and concentrate was offered to both groups. For the 2 wk following the learning period, the sheep were subjected to feeding of the basal diet to avoid carryover effects of the last offered test plant. In the following multiple-choice period, both groups were allowed to select from all test plants during 4 h in the morning for 14 d. Forage intake after 4 and 24 h and feeding behavior during the first 30 min of the test feeding were assessed. Milk yield and composition were measured at the end of the multiple-choice period. Nutrient intake was calculated using feed intake measurements and compositional analyses. Only in Exp. 2, group differences (P < 0.05) were found on d 1 of the multiple-choice period. The experienced sheep consumed more total forage, straw, OM, NDF, ADF, and ADL (nutrients without concentrate). However, across the entire multiple-choice period, there were no differences (P ≥ 0.05) in forage and nutrient intake, feeding behavior, and milk yield and composition between the groups in both experiments. This suggests that sheep can quickly adapt to previously unknown woody feeds of varying origin and quality offered as dried supplements.