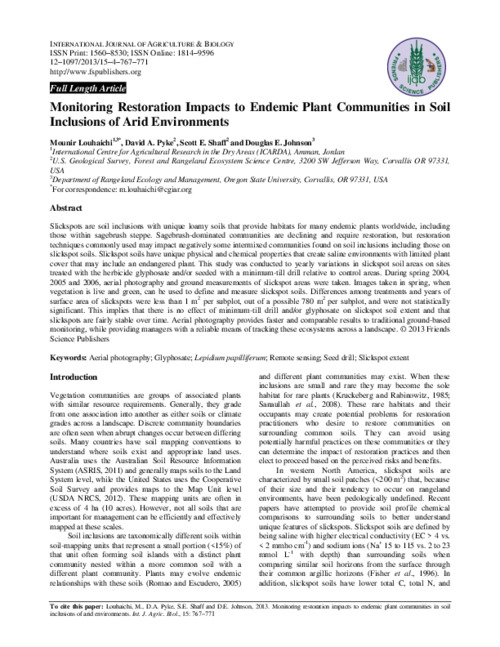 Slickspots are soil inclusions with unique loamy soils that provide habitats for many endemic plants worldwide, including those within sagebrush steppe. Sagebrush-dominated communities are declining and require restoration, but restoration techniques commonly used may impact negatively some intermixed communities found on soil inclusions including those on slickspot soils. Slickspot soils have unique physical and chemical properties that create saline environments with limited plant cover that may include an endangered plant. This study was conducted to yearly variations in slickspot soil areas on sites treated with the herbicide glyphosate and/or seeded with a minimum-till drill relative to control areas. During spring 2004, 2005 and 2006, aerial photography and ground measurements of slickspot areas were taken. Images taken in spring, when vegetation is live and green, can be used to define and measure slickspot soils. Differences among treatments and years of surface area of slickspots were less than 1 m2 per subplot, out of a possible 780 m2 per subplot, and were not statistically significant. This implies that there is no effect of minimum-till drill and/or glyphosate on slickspot soil extent and that slickspots are fairly stable over time. Aerial photography provides faster and comparable results to traditional ground-based monitoring, while providing managers with a reliable means of tracking these ecosystems across a landscape. © 2013 Friends Science Publishers.