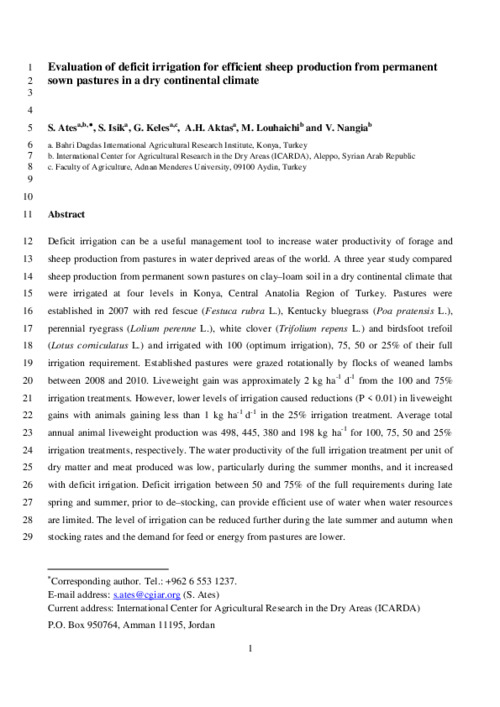 Deficit irrigation can be a useful management tool to increase water productivity of forage and sheep production from pastures in water deprived areas of the world. A three year study compared sheep production from permanent sown pastures on clay–loam soil in a dry continental climate that were irrigated at four levels in Konya, Central Anatolia Region of Turkey. Pastures were established in 2007 with red fescue (Festuca rubra L.), Kentucky bluegrass (Poa pratensis L.), perennial ryegrass (Lolium perenne L.), white clover (Trifolium repens L.) and birdsfoot trefoil (Lotus corniculatus L.) and irrigated with 100 (optimum irrigation), 75, 50 or 25% of their full irrigation requirement. Established pastures were grazed rotationally by flocks of weaned lambs between 2008 and 2010. Liveweight gain was approximately 2 kg ha−1 d−1 from the 100 and 75% irrigation treatments. However, lower levels of irrigation caused reductions (P < 0.01) in liveweight gains with animals gaining less than 1 kg ha−1 d−1 in the 25% irrigation treatment. Average total annual animal liveweight production was 498, 445, 380 and 198 kg ha−1 for 100, 75, 50 and 25% irrigation treatments, respectively. The water productivity of the full irrigation treatment per unit of dry matter and meat produced was low, particularly during the summer months, and it increased with deficit irrigation. Deficit irrigation between 50 and 75% of the full requirements during late spring and summer, prior to de-stocking, can provide efficient use of water when water resources are limited. The level of irrigation can be reduced further during the late summer and autumn when stocking rates and the demand for feed or energy from pastures are lower.