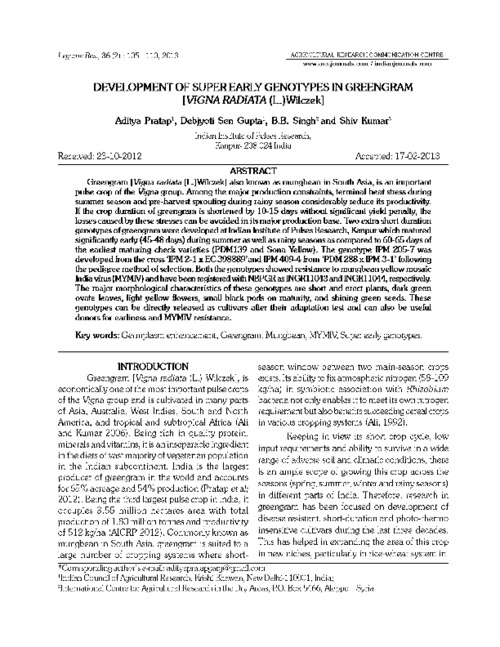 Greengram [Vigna radiata (L.)Wilczek] also known as mungbean in South Asia, is an important pulse crop of the Vigna group. Among the major production constraints, terminal heat stress during summer season and pre-harvest sprouting during rainy season considerably reduce its productivity. If the crop duration of greengram is shortened by 10-15 days without significant yield penalty, the losses caused by these stresses can be avoided in its major production base. Two extra short duration genotypes of greengram were developed at Indian Institute of Pulses Research, Kanpur which matured significantly early (45-48 days) during summer as well as rainy seasons as compared to 60-65 days of the earliest maturing check varieties (PDM139 and Sona Yellow). The genotype IPM 205-7 was developed from the cross ‘IPM 2-1 x EC 398889’and IPM 409-4 from ‘PDM 288 x IPM 3-1’ following the pedigree method of selection. Both the genotypes showed resistance to mungbean yellow mosaic India virus (MYMIV) and have been registered with NBPGR as INGR11043 and INGR11044, respectively. The major morphological characteristics of these genotypes are short and erect plants, dark green ovate leaves, light yellow flowers, small black pods on maturity, and shining green seeds. These genotypes can be directly released as cultivars after their adaptation test and can also be useful donors for earliness and MYMIV resistance.