Status and prospects of food legumes improvement in Morocco 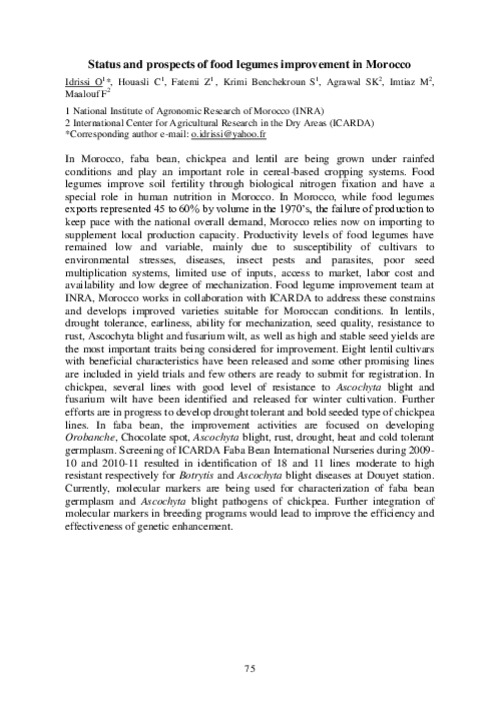 In Morocco, faba bean, chickpea and lentil are being grown under rainfed conditions and play an important role in cereal-based cropping systems. Food legumes improve soil fertility through biological nitrogen fixation and have a special role in human nutrition in Morocco. In Morocco, while food legumes exports represented 45 to 60% by volume in the 1970’s, the failure of production to keep pace with the national overall demand, Morocco relies now on importing to supplement local production capacity. Productivity levels of food legumes have remained low and variable, mainly due to susceptibility of cultivars to environmental stresses, diseases, insect pests and parasites, poor seed multiplication systems, limited use of inputs, access to market, labor cost and availability and low degree of mechanization. Food legume improvement team at INRA, Morocco works in collaboration with ICARDA to address these constrains and develops improved varieties suitable for Moroccan conditions. In lentils, drought tolerance, earliness, ability for mechanization, seed quality, resistance to rust, Ascochyta blight and fusarium wilt, as well as high and stable seed yields are the most important traits being considered for improvement. Eight lentil cultivars with beneficial characteristics have been released and some other promising lines are included in yield trials and few others are ready to submit for registration. In chickpea, several lines with good level of resistance to Ascochyta blight and fusarium wilt have been identified and released for winter cultivation. Further efforts are in progress to develop drought tolerant and bold seeded type of chickpea lines. In faba bean, the improvement activities are focused on developing Orobanche, Chocolate spot, Ascochyta blight, rust, drought, heat and cold tolerant germplasm. Screening of ICARDA Faba Bean International Nurseries during 2009- 10 and 2010-11 resulted in identification of 18 and 11 lines moderate to high resistant respectively for Botrytis and Ascochyta blight diseases at Douyet station. Currently, molecular markers are being used for characterization of faba bean germplasm and Ascochyta blight pathogens of chickpea. Further integration of molecular markers in breeding programs would lead to improve the efficiency and effectiveness of genetic enhancement.