INTELLIGENT OBJECT BASED SMOOTHING: AN ALGORITHM FOR REMOVING NOISES IN THE CLASSIFIED SATELLITE IMAGE 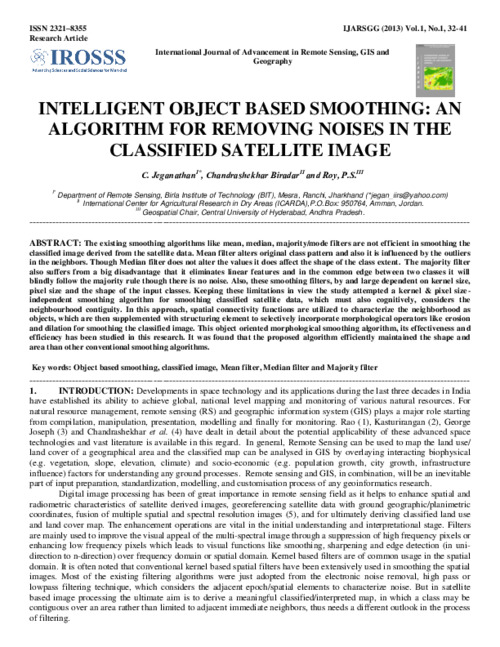 The existing smoothing algorithms like mean, median, majority/mode filters are not efficient in smoothing the classified image derived from the satellite data. Mean filter alters original class pattern and also it is influenced by the outliers in the neighbors. Though Median filter does not alter the values it does affect the shape of the class extent. The majority filter also suffers from a big disadvantage that it eliminates linear features and in the common edge between two classes it will blindly follow the majority rule though there is no noise. Also, these smoothing filters, by and large dependent on kernel size, pixel size and the shape of the input classes. Keeping these limitations in view the study attempted a kernel & pixel size-independent smoothing algorithm for smoothing classified satellite data, which must also cognitively, considers the neighbourhood contiguity. In this approach, spatial connectivity functions are utilized to characterize the neighborhood as objects, which are then supplemented with structuring element to selectively incorporate morphological operators like erosion and dilation for smoothing the classified image. This object oriented morphological smoothing algorithm, its effectiveness and efficiency has been studied in this research. It was found that the proposed algorithm efficiently maintained the shape and area than other conventional smoothing algorithms.