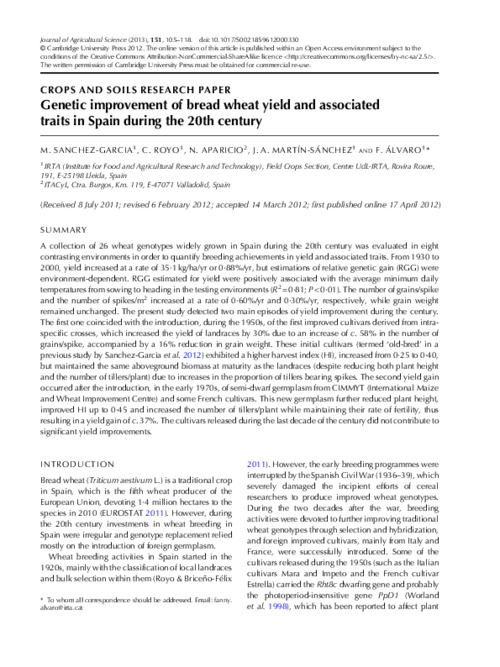 A collection of 26 wheat genotypes widely grown in Spain during the 20th century was evaluated in eight contrasting environments in order to quantify breeding achievements in yield and associated traits. From 1930 to 2000, yield increased at a rate of 35·1 kg/ha/yr or 0·88%/yr, but estimations of relative genetic gain (RGG) were environment-dependent. RGG estimated for yield were positively associated with the average minimum daily temperatures from sowing to heading in the testing environments (R2=0·81; P<0·01). The number of grains/spike and the number of spikes/m2 increased at a rate of 0·60%/yr and 0·30%/yr, respectively, while grain weight remained unchanged. The present study detected two main episodes of yield improvement during the century. The first one coincided with the introduction, during the 1950s, of the first improved cultivars derived from intraspecific crosses, which increased the yield of landraces by 30% due to an increase of c. 58% in the number of grains/spike, accompanied by a 16% reduction in grain weight. These initial cultivars (termed ‘old-bred’ in a previous study by Sanchez-Garcia et al. 2012) exhibited a higher harvest index (HI), increased from 0·25 to 0·40, but maintained the same aboveground biomass at maturity as the landraces (despite reducing both plant height and the number of tillers/plant) due to increases in the proportion of tillers bearing spikes. The second yield gain occurred after the introduction, in the early 1970s, of semi-dwarf germplasm from CIMMYT (International Maize and Wheat Improvement Centre) and some French cultivars. This new germplasm further reduced plant height, improved HI up to 0·45 and increased the number of tillers/plant while maintaining their rate of fertility, thus resulting in a yield gain of c. 37%. The cultivars released during the last decade of the century did not contribute to significant yield improvements.