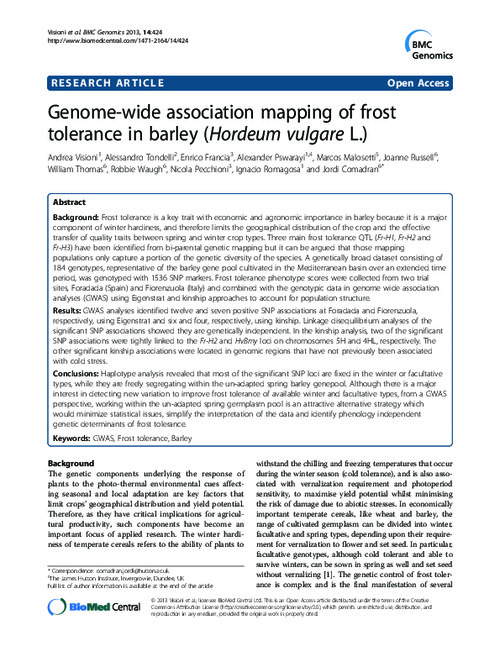 Background: Frost tolerance is a key trait with economic and agronomic importance in barley because it is a major component of winter hardiness, and therefore limits the geographical distribution of the crop and the effective transfer of quality traits between spring and winter crop types. Three main frost tolerance QTL (Fr-H1, Fr-H2 and Fr-H3) have been identified from bi-parental genetic mapping but it can be argued that those mapping populations only capture a portion of the genetic diversity of the species. A genetically broad dataset consisting of 184 genotypes, representative of the barley gene pool cultivated in the Mediterranean basin over an extended time period, was genotyped with 1536 SNP markers. Frost tolerance phenotype scores were collected from two trial sites, Foradada (Spain) and Fiorenzuola (Italy) and combined with the genotypic data in genome wide association analyses (GWAS) using Eigenstrat and kinship approaches to account for population structure. Results: GWAS analyses identified twelve and seven positive SNP associations at Foradada and Fiorenzuola, respectively, using Eigenstrat and six and four, respectively, using kinship. Linkage disequilibrium analyses of the significant SNP associations showed they are genetically independent. In the kinship analysis, two of the significant SNP associations were tightly linked to the Fr-H2 and HvBmy loci on chromosomes 5H and 4HL, respectively. The other significant kinship associations were located in genomic regions that have not previously been associated with cold stress. Conclusions: Haplotype analysis revealed that most of the significant SNP loci are fixed in the winter or facultative types, while they are freely segregating within the un-adapted spring barley genepool. Although there is a major interest in detecting new variation to improve frost tolerance of available winter and facultative types, from a GWAS perspective, working within the un-adapted spring germplasm pool is an attractive alternative strategy which would minimize statistical issues, simplify the interpretation of the data and identify phenology independent genetic determinants of frost tolerance.