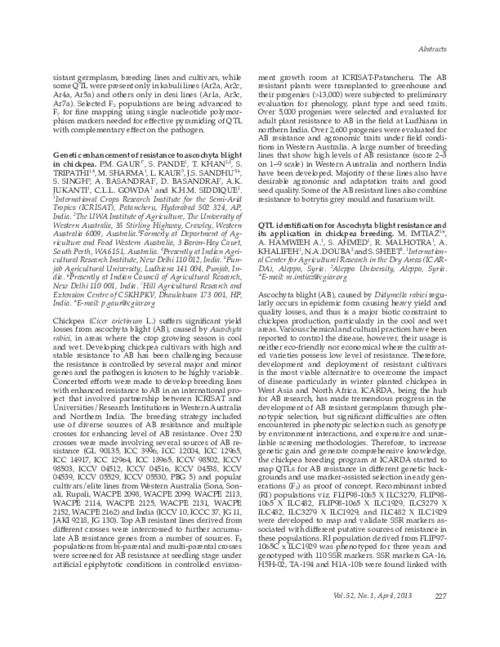 Ascochyta blight (AB), caused by Didymella rabiei regularly occurs in epidemic form causing heavy yield and quality losses, and thus is a major biotic constraint to chickpea production, particularly in the cool and wet areas (1). Various chemical and cultural practices have been reported to control the disease, however, their usage is neither eco-friendly nor economical where the cultivated varieties possess low level of resistance. Therefore, development and deployment of resistant cultivars is the most viable alternative to overcome the impact of disease particularly in winter planted chickpea in West Asia and North Africa. ICARDA, being the hub for AB research, has made tremendous progress in the development of AB resistant germplasm through phenotypic selection, but significant difficulties are often encountered in phenotypic selection such as genotype by environment interactions, and expensive and unreliable screening methodologies. Therefore, to increase genetic gain and generate comprehensive knowledge, the chickpea breeding program at ICARDA has commenced to map QTLs for AB resistance in different genetic backgrounds and use marker-assisted selection in early generations (F2) as proof of concept. Recombinant inbred (RI) populations viz. FLIP98-1065 X ILC3279, FLIP98-1065 X ILC482, FLIP98-1065 X ILC1929, ILC3279 X ILC482, ILC3279 X ILC1929, and ILC482 X ILC1929 were developed to map and validate SSR markers associated with different putative sources of resistance in these populations. RI population derived from FLIP97- 1065C X ILC1929 was phenotyped for three years and genotyped with 110 SSR markers. SSR markers GA-16, H5H-02, TA-194 and H1A-10b were found linked with resistance under field and control conditions with phenotypic variation explained ranging from 10 to 20%. These markers and other publically reported markers were validated in the remaining 5 RI populations. The marker validation results showed that none of the markers alone differentiated resistance sources against different pathotypes in these populations. Thus a set of closely linked markers could be utilized to select for AB resistant genotypes until the availability of diagnostic markers for maker- assisted selection in future.