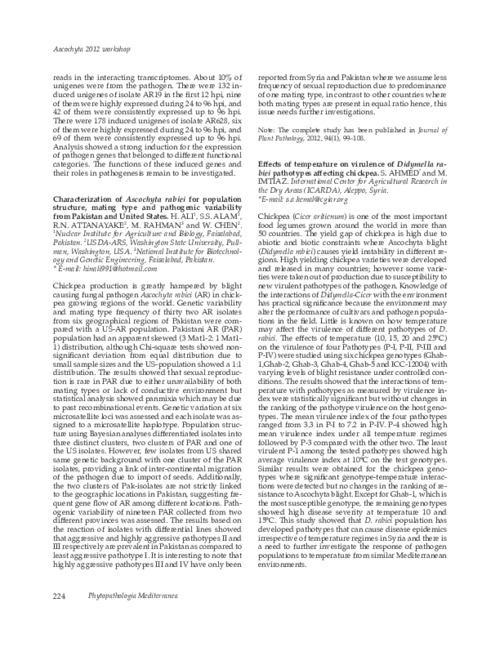 Chickpea (Cicer aritienum) is one of the most important food legumes grown around the world in more than 50 countries. The yield gap of chickpea is high due to abiotic and biotic constraints where Ascochyta blight (Didymella rabiei) causes yield instability in different regions. High yielding chickpea varieties were developed and released in many countries; however some varieties were taken out of production due to susceptibility to new virulent pathotypes of the pathogen. Knowledge of the interactions of Didymella-Cicer with the environment has practical significance because the environment may alter the performance of cultivars and pathogen populations in the field (1, 2). Little is known on how temperature may affect the virulence of different pathotypes of D. rabiei. The effects of temperature (10, 15, 20 and 25oC) on the virulence of four Pathotypes (PI, P-II, P-III and P-IV) were studied using six chickpea genotypes (Ghab-1,Ghab-2, Ghab-3, Ghab-4, Ghab-5 and ICC-12004) with varying levels of blight resistance under controlled conditions. The results showed that the interactions of temperature with pathotypes as measured by virulence index were statistically significant but without changes in the ranking of the pathotype virulence on the host genotypes. The mean virulence index of the four pathotypes ranged from 3.3 in P-I to 7.2 in PIV. P-4 showed high mean virulence index under all temperature regimes followed by P-3 compared with the other two. The least virulent P-1 among the tested pathotypes showed high average virulence index at 10oC on the test genotypes. Similar results were obtained for the chickpea genotypes where significant genotype by temperature interactions were detected but no changes in the ranking of resistance to Ascochyta blight. Except for Ghab-1, which is the most susceptible genotype, the remaining genotypes showed high disease severity at temperature 10 and 15oC. This study showed that D. rabiei population has developed pathotypes that can cause disease epidemics irrespective of temperature regimes in Syria and there is a need to further investigate the response of pathogen populations to temperature from similar Mediterranean environments.