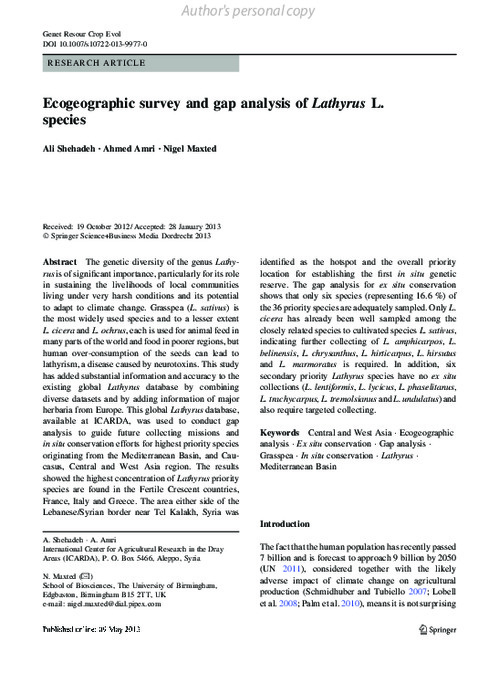 The genetic diversity of the genus Lathyrus is of significant importance, particularly for its role in sustaining the livelihoods of local communities living under very harsh conditions and its potential to adapt to climate change. Grasspea (L. sativus) is the most widely used species and to a lesser extent L. cicera and L. ochrus, each is used for animal feed in many parts of the world and food in poorer regions, but human over-consumption of the seeds can lead to lathyrism, a disease caused by neurotoxins. This study has added substantial information and accuracy to the existing global Lathyrus database by combining diverse datasets and by adding information of major herbaria from Europe. This global Lathyrus database, available at ICARDA, was used to conduct gap analysis to guide future collecting missions and in situ conservation efforts for highest priority species originating from the Mediterranean Basin, and Caucasus, Central and West Asia region. The results showed the highest concentration of Lathyrus priority species are found in the Fertile Crescent countries, France, Italy and Greece. The area either side of the Lebanese/Syrian border near Tel Kalakh, Syria was identified as the hotspot and the overall priority location for establishing the first in situ genetic reserve. The gap analysis for ex situ conservation shows that only six species (representing 16.6 %) of the 36 priority species are adequately sampled. Only L. cicera has already been well sampled among the closely related species to cultivated species L. sativus, indicating further collecting of L. amphicarpos, L. belinensis, L. chrysanthus, L. hirticarpus, L. hirsutus and L. marmoratus is required. In addition, six secondary priority Lathyrus species have no ex situ collections (L. lentiformis, L. lycicus, L. phaselitanus, L. trachycarpus, L. tremolsianus and L. undulatus) and also require targeted collecting.