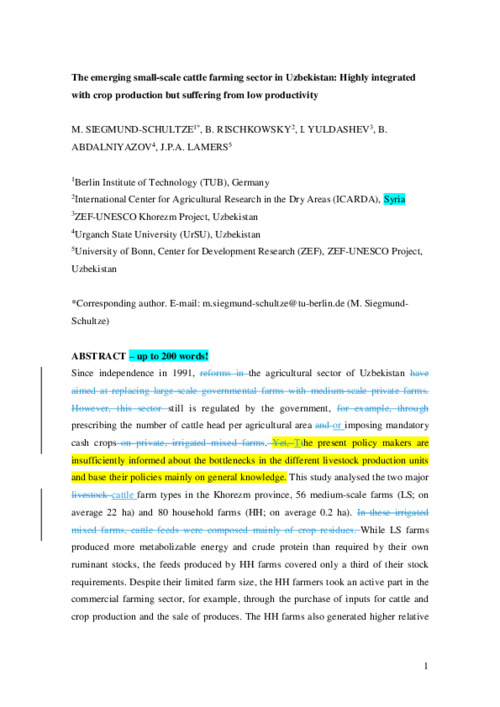 Even two decades after independence in 1991, the agricultural sector of Uzbekistan remains regulated by the government, prescribing the number of cattle head per agricultural area or imposing mandatory cash crops. The policy makers are insufficiently informed about the bottlenecks in the different livestock production units and base their policies mainly on general knowledge. This study analyzed the two major cattle farm types in the Khorezm province, 56 medium-scale farms (LS; on average 22 ha) and 80 household farms (HH; on average 0.2 ha). While LS farms produced more metabolizable energy and crude protein than required by their own ruminant livestock, the feeds produced by HH farms covered only a third of the requirements. Despite their limited farm size, the HH farmers took an active part in the commercial farming sector, for example, through the purchase of inputs for cattle and crop production, and product sales. The HH farms generated higher relative crop yields than their LS counterparts, while cattle productivity of both was comparable, albeit low. The present findings can be considered as a benchmark for monitoring developments in the cattle sector and as a source of information for directing improvements in feed supply, cattle health and husbandry.