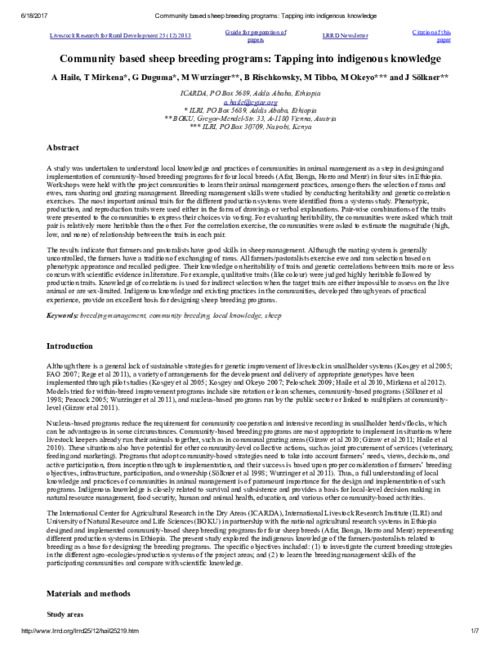 A study was undertaken to understand local knowledge and practices of communities in animal management as a step in designing and implementation of communitybased breeding programs for four local breeds (Afar, Bonga, Horro and Menz) in four sites in Ethiopia. Workshops were held with the project communities to learn their animal management practices, among others the selection of rams and ewes, ram sharing and grazing management. Breeding management skills were studied by conducting heritability and genetic correlation exercises. The most important animal traits for the different production systems were identified from a systems study. Phenotypic, production, and reproduction traits were used either in the form of drawings or verbal explanations. Pairwise combinations of the traits were presented to the communities to express their choices via voting. For evaluating heritability, the communities were asked which trait pair is relatively more heritable than the other. For the correlation exercise, the communities were asked to estimate the magnitude (high, low, and none) of relationship between the traits in each pair. The results indicate that farmers and pastoralists have good skills in sheep management. Although the mating system is generally uncontrolled, the farmers have a tradition of exchanging of rams. All farmers/pastoralists exercise ewe and ram selection based on phenotypic appearance and recalled pedigree. Their knowledge on heritability of traits and genetic correlations between traits more or less concurs with scientific evidence in literature. For example, qualitative traits (like colour) were judged highly heritable followed by production traits. Knowledge of correlations is used for indirect selection when the target traits are either impossible to assess on the live animal or are sexlimited. Indigenous knowledge and existing practices in the communities, developed through years of practical experience, provide an excellent basis for designing sheep breeding programs.