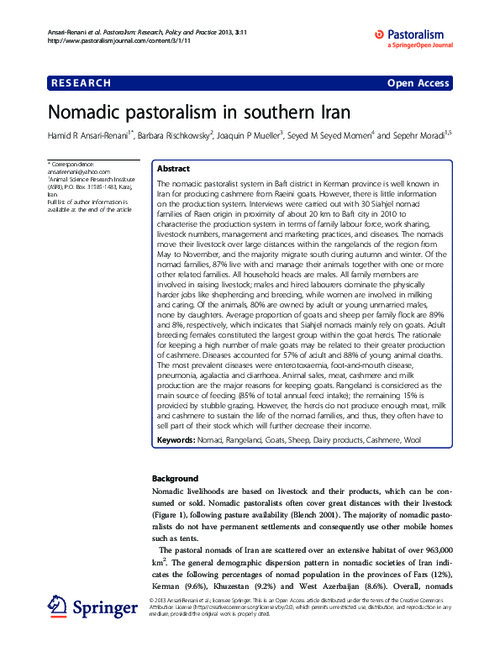 The nomadic pastoralist system in Baft district in Kerman province is well known in Iran for producing cashmere from Raeini goats. However, there is little information on the production system. Interviews were carried out with 30 Siahjel nomad families of Raen origin in proximity of about 20 km to Baft city in 2010 to characterise the production system in terms of family labour force, work sharing, livestock numbers, management and marketing practices, and diseases. The nomads move their livestock over large distances within the rangelands of the region from May to November, and the majority migrate south during autumn and winter. Of the nomad families, 87% live with and manage their animals together with one or more other related families. All household heads are males. All family members are involved in raising livestock; males and hired labourers dominate the physically harder jobs like shepherding and breeding, while women are involved in milking and caring. Of the animals, 80% are owned by adult or young unmarried males, none by daughters. Average proportion of goats and sheep per family flock are 89% and 8%, respectively, which indicates that Siahjel nomads mainly rely on goats. Adult breeding females constituted the largest group within the goat herds. The rationale for keeping a high number of male goats may be related to their greater production of cashmere. Diseases accounted for 57% of adult and 88% of young animal deaths. The most prevalent diseases were enterotoxaemia, foot-and-mouth disease, pneumonia, agalactia and diarrhoea. Animal sales, meat, cashmere and milk production are the major reasons for keeping goats. Rangeland is considered as the main source of feeding (85% of total annual feed intake); the remaining 15% is provided by stubble grazing. However, the herds do not produce enough meat, milk and cashmere to sustain the life of the nomad families, and thus, they often have to sell part of their stock which will further decrease their income.