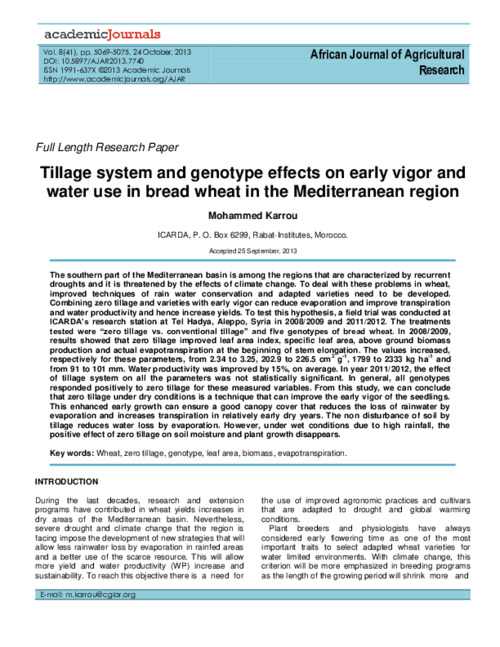 The southern part of the Mediterranean basin is among the regions that are characterized by recurrent droughts and it is threatened by the effects of climate change. To deal with these problems in wheat, improved techniques of rain water conservation and adapted varieties need to be developed. Combining zero tillage and varieties with early vigor can reduce evaporation and improve transpiration and water productivity and hence increase yields. To test this hypothesis, a field trial was conducted at ICARDA’s research station at Tel Hadya, Aleppo, Syria in 2008/2009 and 2011/2012. The treatments tested were “zero tillage vs. conventional tillage” and five genotypes of bread wheat. In 2008/2009, results showed that zero tillage improved leaf area index, specific leaf area, above ground biomass production and actual evapotranspiration at the beginning of stem elongation. The values increased, respectively for these parameters, from 2.34 to 3.25, 202.9 to 226.5 cm2 g-1, 1799 to 2333 kg ha-1 and from 91 to 101 mm. Water productivity was improved by 15%, on average. In year 2011/2012, the effect of tillage system on all the parameters was not statistically significant. In general, all genotypes responded positively to zero tillage for these measured variables. From this study, we can conclude that zero tillage under dry conditions is a technique that can improve the early vigor of the seedlings. This enhanced early growth can ensure a good canopy cover that reduces the loss of rainwater by evaporation and increases transpiration in relatively early dry years. The non disturbance of soil by tillage reduces water loss by evaporation. However, under wet conditions due to high rainfall, the positive effect of zero tillage on soil moisture and plant growth disappears.