Combined effect of tillage system, supplemental irrigation and genotype on bread wheat yield and water use in the dry Mediterranean region 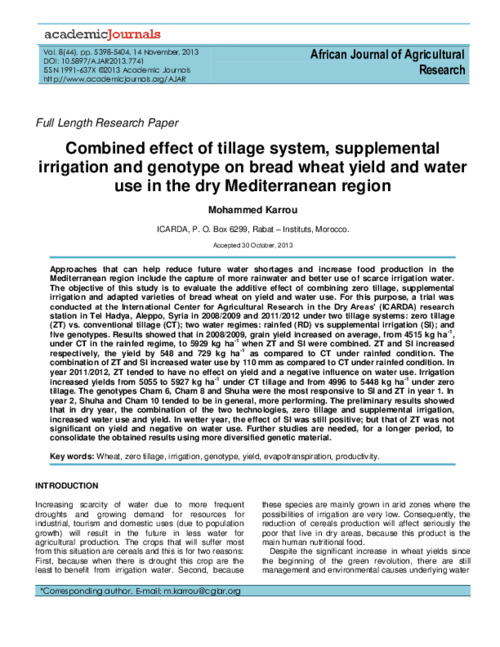 Approaches that can help reduce future water shortages and increase food production in the Mediterranean region include the capture of more rainwater and better use of scarce irrigation water. The objective of this study is to evaluate the additive effect of combining zero tillage, supplemental irrigation and adapted varieties of bread wheat on yield and water use. For this purpose, a trial was conducted at the International Center for Agricultural Research in the Dry Areas’ (ICARDA) research station in Tel Hadya, Aleppo, Syria in 2008/2009 and 2011/2012 under two tillage systems: zero tillage (ZT) vs. conventional tillage (CT); two water regimes: rainfed (RD) vs supplemental irrigation (SI); and five genotypes. Results showed that in 2008/2009, grain yield increased on average, from 4515 kg ha-1, under CT in the rainfed regime, to 5929 kg ha-1 when ZT and SI were combined. ZT and SI increased respectively, the yield by 548 and 729 kg ha-1 as compared to CT under rainfed condition. The combination of ZT and SI increased water use by 110 mm as compared to CT under rainfed condition. In year 2011/2012, ZT tended to have no effect on yield and a negative influence on water use. Irrigation increased yields from 5055 to 5927 kg ha-1 under CT tillage and from 4996 to 5448 kg ha-1 under zero tillage. The genotypes Cham 6, Cham 8 and Shuha were the most responsive to SI and ZT in year 1. In year 2, Shuha and Cham 10 tended to be in general, more performing. The preliminary results showed that in dry year, the combination of the two technologies, zero tillage and supplemental irrigation, increased water use and yield. In wetter year, the effect of SI was still positive; but that of ZT was not significant on yield and negative on water use. Further studies are needed, for a longer period, to consolidate the obtained results using more diversified genetic material.