Response of Peach, Plum and Almond to Water Restrictions Applied during Slowdown Periods of Fruit Growth 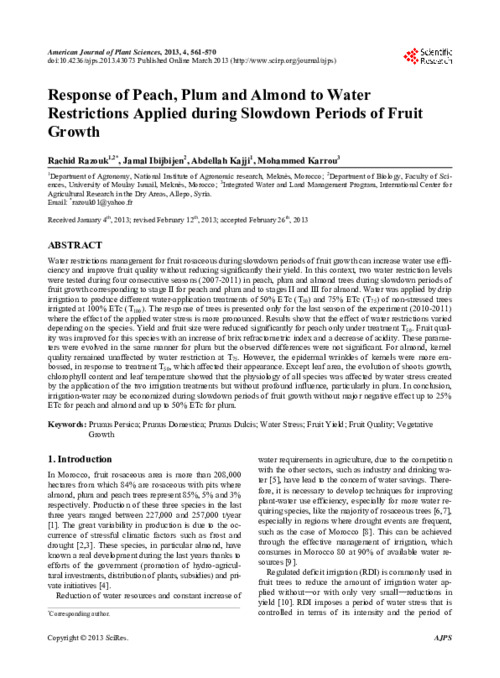 Water restrictions management for fruit rosaceous during slowdown periods of fruit growth can increase water use effi- ciency and improve fruit quality without reducing significantly their yield. In this context, two water restriction levels were tested during four consecutive seasons (2007-2011) in peach, plum and almond trees during slowdown periods of fruit growth corresponding to stage II for peach and plum and to stages II and III for almond. Water was applied by drip irrigation to produce different water-application treatments of 50% ETc (T50) and 75% ETc (T75) of non-stressed trees irrigated at 100% ETc (T100). The response of trees is presented only for the last season of the experiment (2010-2011) where the effect of the applied water stress is more pronounced. Results show that the effect of water restrictions varied depending on the species. Yield and fruit size were reduced significantly for peach only under treatment T50. Fruit qual- ity was improved for this species with an increase of brix refractometric index and a decrease of acidity. These parame- ters were evolved in the same manner for plum but the observed differences were not significant. For almond, kernel quality remained unaffected by water restriction at T75. However, the epidermal wrinkles of kernels were more em- bossed, in response to treatment T50, which affected their appearance. Except leaf area, the evolution of shoots growth, chlorophyll content and leaf temperature showed that the physiology of all species was affected by water stress created by the application of the two irrigation treatments but without profound influence, particularly in plum. In conclusion, irrigation-water may be economized during slowdown periods of fruit growth without major negative effect up to 25% ETc for peach and almond and up to 50% ETc for plum.