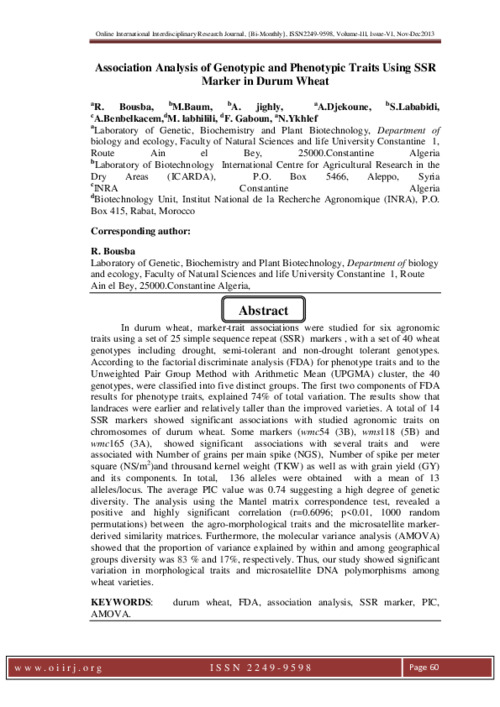 In durum wheat, marker-trait associations were studied for six agronomic traits using a set of 25 simple sequence repeat (SSR) markers , with a set of 40 wheat genotypes including drought, semi-tolerant and non-drought tolerant genotypes. According to the factorial discriminate analysis (FDA) for phenotype traits and to the Unweighted Pair Group Method with Arithmetic Mean (UPGMA) cluster, the 40 genotypes, were classified into five distinct groups. The first two components of FDA results for phenotype traits, explained 74% of total variation. The results show that landraces were earlier and relatively taller than the improved varieties. A total of 14 SSR markers showed significant associations with studied agronomic traits on chromosomes of durum wheat. Some markers (wmc54 (3B), wms118 (5B) and wmc165 (3A), showed significant associations with several traits and were associated with Number of grains per main spike (NGS), Number of spike per meter square (NS/m2)and throusand kernel weight (TKW) as well as with grain yield (GY) and its components. In total, 136 alleles were obtained with a mean of 13 alleles/locus. The average PIC value was 0.74 suggesting a high degree of genetic diversity. The analysis using the Mantel matrix correspondence test, revealed a positive and highly significant correlation (r=0.6096; p<0.01, 1000 random permutations) between the agro-morphological traits and the microsatellite markerderived similarity matrices. Furthermore, the molecular variance analysis (AMOVA) showed that the proportion of variance explained by within and among geographical groups diversity was 83 % and 17%, respectively. Thus, our study showed significant variation in morphological traits and microsatellite DNA polymorphisms among wheat varieties.