Single Nucleotide Polymorphisms in HSP17.8 and Their Association with Agronomic Traits in Barley 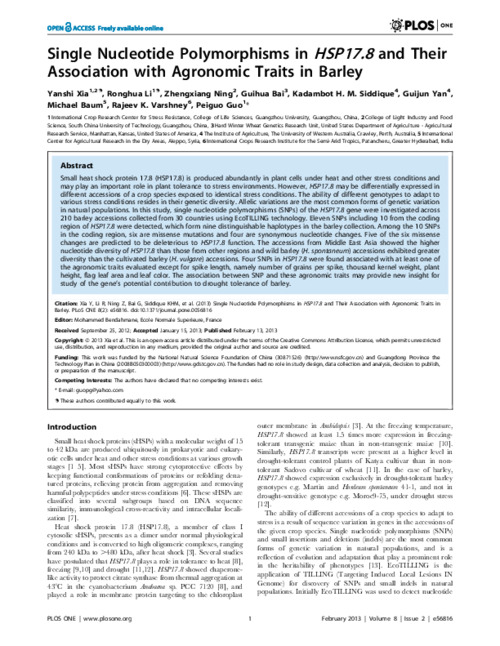 Small heat shock protein 17.8 (HSP17.8) is produced abundantly in plant cells under heat and other stress conditions and may play an important role in plant tolerance to stress environments. However, HSP17.8 may be differentially expressed in different accessions of a crop species exposed to identical stress conditions. The ability of different genotypes to adapt to various stress conditions resides in their genetic diversity. Allelic variations are the most common forms of genetic variation in natural populations. In this study, single nucleotide polymorphisms (SNPs) of the HSP17.8 gene were investigated across 210 barley accessions collected from 30 countries using EcoTILLING technology. Eleven SNPs including 10 from the coding region of HSP17.8 were detected, which form nine distinguishable haplotypes in the barley collection. Among the 10 SNPs in the coding region, six are missense mutations and four are synonymous nucleotide changes. Five of the six missense changes are predicted to be deleterious to HSP17.8 function. The accessions from Middle East Asia showed the higher nucleotide diversity of HSP17.8 than those from other regions and wild barley (H. spontaneum) accessions exhibited greater diversity than the cultivated barley (H. vulgare) accessions. Four SNPs in HSP17.8 were found associated with at least one of the agronomic traits evaluated except for spike length, namely number of grains per spike, thousand kernel weight, plant height, flag leaf area and leaf color. The association between SNP and these agronomic traits may provide new insight for study of the gene’s potential contribution to drought tolerance of barley.