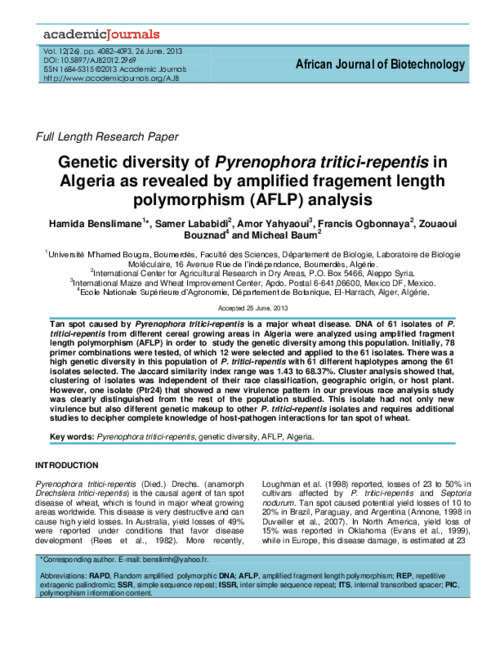 Tan spot caused by Pyrenophora tritici-repentis is a major wheat disease. DNA of 61 isolates of P. tritici-repentis from different cereal growing areas in Algeria were analyzed using amplified fragment length polymorphism (AFLP) in order to study the genetic diversity among this population. Initially, 78 primer combinations were tested, of which 12 were selected and applied to the 61 isolates. There was a high genetic diversity in this population of P. tritici-repentis with 61 different haplotypes among the 61 isolates selected. The Jaccard similarity index range was 1.43 to 68.37%. Cluster analysis showed that, clustering of isolates was independent of their race classification, geographic origin, or host plant. However, one isolate (Ptr24) that showed a new virulence pattern in our previous race analysis study was clearly distinguished from the rest of the population studied. This isolate had not only new virulence but also different genetic makeup to other P. tritici-repentis isolates and requires additional studies to decipher complete knowledge of host-pathogen interactions for tan spot of wheat.